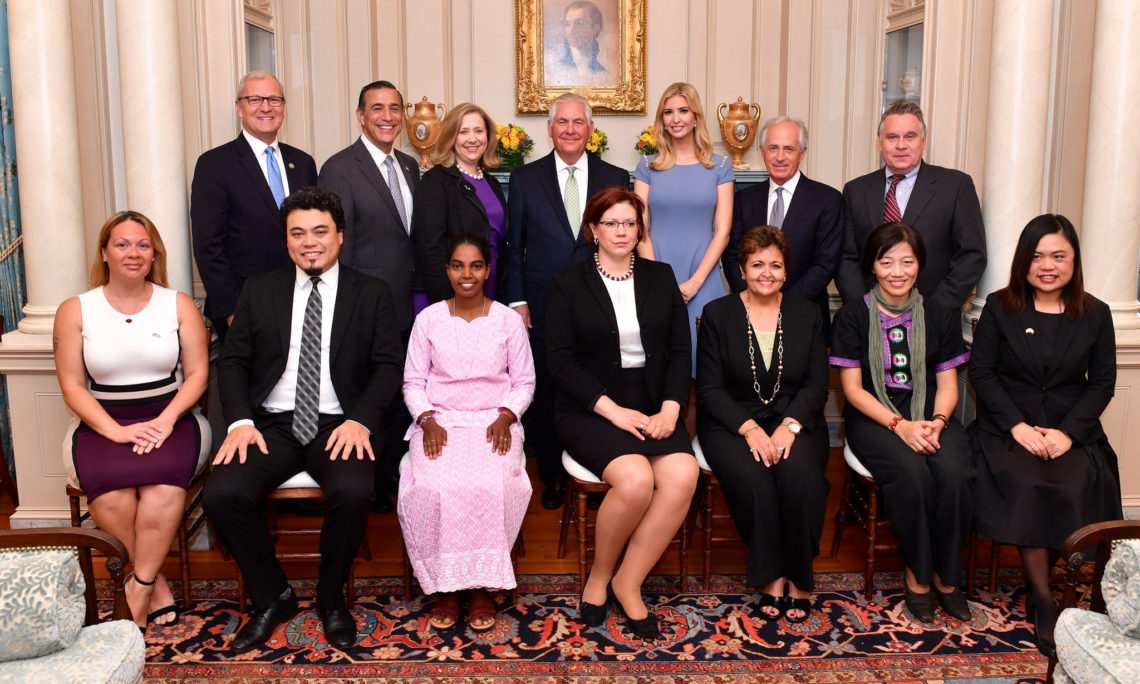 Each year, the Department of State honors individuals around the world who have devoted their lives to the fight against human trafficking. These individuals are NGO workers, lawmakers, police officers, and concerned citizens who are committed to ending modern slavery. They are recognized for their tireless efforts—despite resistance, opposition, and threats to their lives—to protect victims, punish offenders, and raise awareness of ongoing criminal practices in their countries and abroad.

Alika Kinan is the first survivor of human trafficking in Argentina to win an award for damages in a civil sex trafficking case. In November 2016, she helped secure a criminal conviction of her traffickers and won the civil judgment and award; this was the first time in the country’s history that a local government was ordered to pay a civil award to a victim of human trafficking.

Since escaping from her trafficking situation in 2012, Ms. Kinan has advocated tirelessly for the rights of women at both the national and provincial levels. She has partnered with the Argentine government to enhance its response to human trafficking and continues to fight on behalf of trafficking victims for greater access to essential services such as medical treatment, housing, job training, and education. Ms. Kinan frequently works with the Argentine Prosecutor General’s Office, the Public Defenders’ Office, and the Ministry of Justice to improve the prosecution of human trafficking cases at the national and provincial levels. She also participates in training efforts and advises provincial governments, NGOs, and local universities on programs to prevent trafficking in persons across the country.

Ms. Kinan is working to establish an NGO to help raise awareness and improve assistance to human trafficking victims in Argentina.

Leonardo Sakamoto is a Brazilian journalist with an unwavering commitment to the protection of fundamental freedoms in Brazil. In 2001, he established Repórter Brasil, an NGO dedicated to monitoring and combating forced labor in Brazil. Repórter Brasil’s pioneering investigative journalism has helped leaders in the public and private sectors, as well as in civil society, use research and educational programs as tools to combat human trafficking, especially forced labor.

With Mr. Sakamoto at the helm, Repórter Brasil was also an active participant in the creation of the National Pact for the Eradication of Slave Labor, an agreement that brings together 400 companies committed to combating forced labor. His devotion to the issue is exemplified by his role in the production of the Lista Suja, or the dirty list, a public list of individuals and private companies found to be using forced labor in their supply chains, which has mobilized the Brazilian government to increase its efforts to prevent forced labor in supply chains.

Vanaja Jasphine is the driving force behind and coordinator of the Kumbo Diocesan Commission for Justice and Peace in the Northwest Region of Cameroon. In this role, she has placed her organization at the forefront of the fight against human trafficking in Cameroon and has contributed to a renewed government commitment to combat human trafficking.

Sister Jasphine has worked tirelessly to inform authorities and civil society leaders, including those in the religious community and media partners, about human trafficking, especially on patterns of movement that create vulnerabilities. She played a key role in recognizing the trend of Cameroonians traveling to the Middle East and being forced into domestic servitude or sex trafficking, and then spurred the government to take action, including drafting migrant worker agreements and enhancing screening measures at airports. Sister Jasphine and her organization have identified more than 200 Cameroonian trafficking victims in the Middle East during the past few years. In 2016 alone, she helped facilitate the return of at least 14 victims from the Middle East, including raising funds to sponsor return air travel for four of them.

Through her organization, Sister Jasphine has helped provide reintegration assistance to survivors, initiate a number of trafficking-related court proceedings, and offer legal assistance to victims.

Viktoria Sebhelyi is a Hungarian sociologist and human rights activist whose groundbreaking research has been instrumental in increasing awareness and understanding of human trafficking among policymakers and NGO service providers in Hungary. Known as both an academic expert on the issue and a dedicated advocate, Ms. Sebhelyi has galvanized government and NGO actors to collaborate on enhancing protections for victims.

She worked as a researcher and legal analyst between 2013 and 2015 at the Central European University’s Center for Policy Studies, writing a report on the prevalence and characteristics of child sex trafficking in Hungary—the first of its kind.

In addition to her academic work, Ms. Sebhelyi collaborates with Hungarian initiatives to improve the country’s referral system. She has successfully brought together government officials and civil society actors to address structural challenges affecting vulnerable populations and increase the effectiveness of identifying and providing services for victims of trafficking and abuse, especially women and children. She regularly dedicates her time volunteering for women’s and human rights NGOs (NANE Women’s Rights Association, Sex Education Foundation, and Hungarian Women’s Lobby) and domestic violence shelters, as well as in state institutions to increase the effectiveness of the anti-trafficking referral system.

Mahesh Muralidhar Bhagwat, who currently serves as the first Commissioner of Police of Rachakonda, a police commissionerate in India’s Telangana state that covers more than four million residents, has demonstrated remarkable commitment to the fight against human trafficking for the last 13 years. He has participated in anti-trafficking operations that have removed hundreds of victims from situations of trafficking and, with the help of other government departments and civil society organizations, has ensured their placement in support programs.

Mr. Bhagwat’s dedication to the fight against human trafficking is exemplified by his innovative and highly effective approach to investigating cases and his success in dismantling trafficking operations within his command areas. He has pioneered the use of legal provisions to close sites where human trafficking is known to occur. Under his command, Rachakonda police closed 25 brothels—five hotels and 20 residential apartments—in less than a year and participated in one of the largest crackdowns on labor trafficking in the country, which led to the identification and removal of more than 350 children forced to work in brick kilns.

In addition to being a central figure in trafficking deterrence efforts, Mr. Bhagwat also constantly pushes for human trafficking to be a top priority for the Telangana state of India.

Amina Oufroukhi is a judge within the Moroccan Ministry of Justice’s Directorate of Criminal Affairs and Pardons, which is responsible for women’s and children’s issues, vulnerable populations, and trafficking in persons. She played a critical role in drafting and encouraging the passage of Morocco’s anti-trafficking law in 2016 and has been a driving force within the government to develop an implementation plan to ensure the protection of victims and the appropriate punishment of perpetrators.

As the head of the central unit coordinating the care of women and children in the courts, Judge Oufroukhi established special protection units in Moroccan courts for women and children and later drafted new legal procedures to extend these protections to all trafficking victims. She helped establish a group of expert judges to train judicial and law enforcement personnel and prepared detailed legal guidance clarifying the provisions of the law for all Moroccan courts.

In addition, Judge Oufroukhi has managed several international cooperative projects on combating trafficking in persons, assisted in the drafting of studies on human trafficking in Morocco, and worked to raise awareness and organize training for government officials, prosecutors, judges, social workers, and security service officers on protecting trafficking victims.

Allison Lee is a co-founder and the Secretary General of the Yilan Migrant Fishermen Union, Taiwan’s first labor union composed of and led by foreign workers, and is a leading voice in demanding stronger protections for fishing crewmembers and accountability for traffickers. Ms. Lee spearheaded the establishment of the union after 16 years working in Taiwan NGOs focused on labor rights issues and four years handling labor disputes at the municipal level as an employee of Taipei’s Labor Affairs Bureau.

Since founding the union in 2013, Ms. Lee has advocated for the rights of foreign fishermen working on Taiwan-flagged vessels and documented hundreds of accounts of exploitation, abuse, and underpayment. By serving as a voice for these often unseen, unheard foreign fishing crewmembers, Ms. Lee has raised international and domestic awareness of exploitative working conditions, including instances of forced labor. In one case, she successfully pushed for reopening of an investigation into the death of an Indonesian fisherman on a Taiwan-flagged vessel.

Ms. Lee and her advocacy partners drive change from the grassroots level through sustained pressure on officials and direct engagement with under-represented communities, including victims of human trafficking. She continues to engage local labor bureaus, fisheries associations, and law enforcement to seek justice and compensation for crewmembers who are exploited at the hands of their employers and brokers.

Boom Mosby, the founder and director of the HUG Project, is a passionate advocate for child victims of sexual abuse in Thailand and has been instrumental in the advancement of a victim-centered approach in Thai anti-trafficking efforts.

Ms. Mosby’s early work with the HUG Project included a partnership with the Royal Thai Police to provide educational and support services for at-risk children in the city of Chiang Mai. As Ms. Mosby’s involvement with child trafficking investigations deepened, she developed key relationships with law enforcement, government officials, and NGO partners, establishing a network of resources and support for child victims.

In 2015, she played a fundamental role in opening the Advocacy Center for Children Thailand (ACT House) in Chiang Mai—the first child advocacy center in all of Southeast Asia. Under Ms. Mosby’s leadership, the ACT House has supported more than 81 investigations and the arrest of more than 20 perpetrators. In 2016, she joined the Thailand Internet Crimes Against Children Task Force and continues to work tirelessly to develop standard operating procedures for investigating and prosecuting cybercrimes against children using a victim-centered approach. As the use of the internet to facilitate child trafficking grows, Ms. Mosby is battling technology with technology by implementing IT forensics and other systematic strategies.

Ms. Mosby continues to promote prevention, recovery, and reintegration programs for survivors and those vulnerable to trafficking.