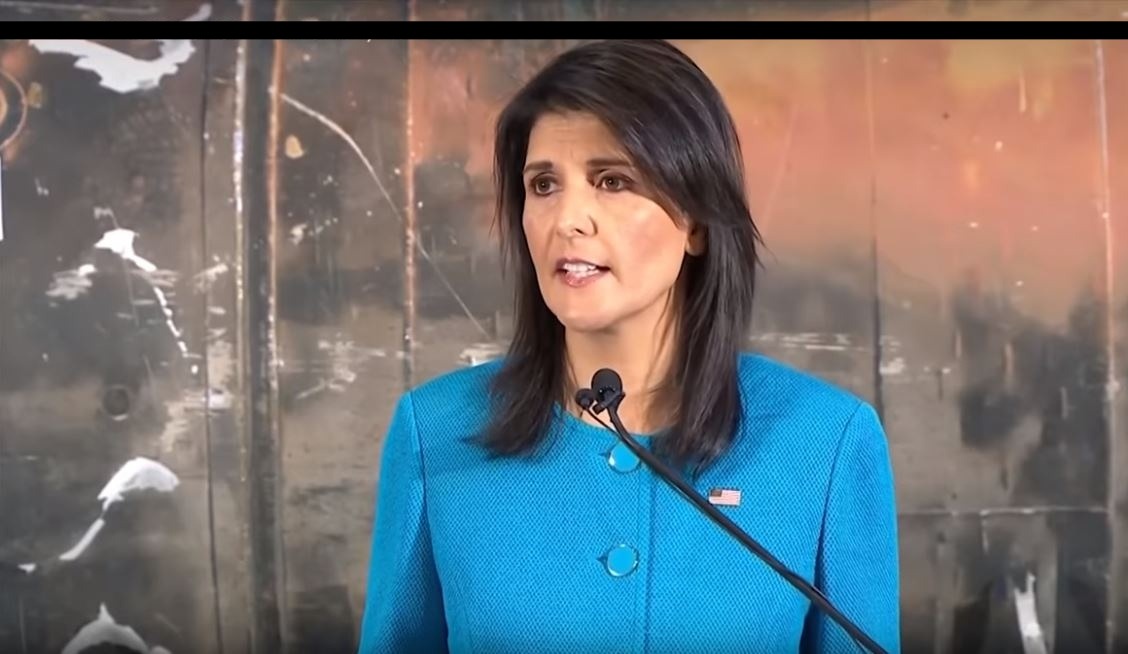 Press Release: Ambassador Haley on an Open Letter by Families of Political Prisoners in Iran

The Iranian regime’s long history of human rights violations are well known. Judicial cases, trials, and sentences continue to proceed without transparency and due process for Iranian citizens as well as citizens of other countries unjustly imprisoned by the regime in Iran, including several American citizens. The families of several of these prisoners have united in writing an open letter to world leaders, the heads of human rights organizations, and the news media to raise awareness of the plight of their loved ones.

“Our hearts hurt for the families around the world whose loved ones have become political prisoners in Iran. Iran’s awful practice of detaining other countries’ citizens – including Americans – is just another example of Iran’s violations of international norms. Iran invented reasons to throw these innocent people in jail and keeps them there with no end in sight and no fair judicial process for them to pursue. They should be released immediately and returned to their families. We won’t rest until they are,” said Ambassador Haley.

Text of the letter:

We are the families of political hostages in Iran, and we ask for your urgent action.

We come from many countries, with different backgrounds and different perspectives, but we have banded together now to come to you as one voice. We shall remain quiet no longer.

In September 2018, at a side event during the United Nations General Assembly, several of our families gathered together for the first time to share stories and struggles about getting our loved ones released. We met again a few weeks ago, this time to share our testimonies with the UN Special Rapporteur on the human rights situation in Iran. The similarities between our loved ones’ cases is striking. Each story is not just a case of arbitrary detention, but deliberate and tactical moves by the Iranian authorities to secure bargaining chips.

                 Ahmadreza Djalali, a Swedish-Iranian scientist, was invited by Iranian universities to develop training for researchers, and was arrested by the Ministry of Intelligence of Iran in March 2016. He was kept in solitary confinement for more than 3 months, and without any access to a lawyer for 6 months. During that time, Ahmadreza was harmed physically and tortured psychologically, and falsely led to believe that he would be released if he made a confession as dictated by the intelligence agents. He was forced to do an interview that was later edited and aired on state TV to accuse Ahmadreza of unfounded allegations. Ahmadreza has not received a fair trial since being held for 985 days, despite no evidence ever presented against him and calls by the UN, academics and 75 Nobel laureates for his release. After being denied medical care for over a year, after two long hunger strikes, each lasting 40-50 days and leaving him in very weak physical condition, he has now been transferred to a hospital for emergency surgery. His physical state is extremely poor due to such a prolonged wait for medical attention.

                 Kamran Ghaderi, father of three, Austrian/Iranian citizen and IT consultant, was arbitrarily detained at the airport when he arrived from Vienna to Tehran for a regular business trip in January 2016. Initially, he was held in solitary confinement without charges, and after three months of isolation, torture and false promises by authorities, Kamran signed a forced confession. His lawyer only visited him for the first time for 20 minutes the day before he was issued a 10-year imprisonment sentence for conducting espionage on behalf of a hostile nation. He has had no consular access. While in prison, he has had two operations in which doctors removed intervertebral discs and operated on his spinal cord. He also has a tumor on his left leg bone that has not been treated. Today is the 1,066th day of his detention.

                 Siamak Namazi was arrested, tried, and summarily convicted and sentenced to 10 years in prison on charges of “collaborating with a hostile state,” referring to the United States. He was held for over two years in exceptionally harsh conditions in the Islamic Revolutionary Guard Corps (IRGC) controlled wing of Evin Prison, including in solitary confinement and while being forced to sleep on a hard floor with no mattress, and being physically and psychologically tortured. He has been held for 1,145 days, since October 2015.

                 Baquer Namazi is Siamak Namazi’s 82-year-old father, who was also given a 10-year sentence on charges of collaborating with a hostile state. An ex-UNICEF staffer, he has suffered from deteriorating health, and has been hospitalized seven times with various heart and serious ailments. While out of prison on restricted medical leave, his health continues to decline. Baquer has been held for 1,015 days, since February 2016.

                 Nizar Zakka, a Lebanese national and U.S. legal permanent resident, is a world-renowned Internet freedom and freedom of speech advocate. He is the World IT Alliance Vice Chairman, UN-ITU member, and Secretary General of IJMA3: a consortium of 19 Arab ICT associations. He was invited to Iran by the Vice President for a women empowerment conference. After the conference, he was kidnapped by the IRGC on his way to the airport. Recently, in an AP interview, President Rouhani’s Advisor admitted that Nizar’s kidnapping was in no way approved by the government. Never before heard of in recent history has a country officially invited a guest and then taken him hostage. Nizar has been held for 1,172 days, since September 2015.

                 Saeed Malekpour was wrongly imprisoned in October 2008 when he traveled to Iran from Canada to say goodbye to his dying father. Saeed is currently held in Evin Prison on a life sentence. He was brutally tortured both physically and psychologically to force him to confess to a list of accusations carved out for him by the IRGC. He was sentenced to death twice and kept in solitary confinement for more than three years. He lived with the fear of execution for five years, despite no evidence ever presented against him. Saeed has not received a fair trial since being held for 3,711 days, more than 10 years.

                 Robert Levinson, an American citizen, “disappeared” on Kish Island, Iran. The Iranian government has never publicly admitted to taking Bob (as his family calls him) but a PressTV article initially reported he was being held by security forces and would be “freed in a matter of days”. 4,287 days later, over 11 ½ years later, Bob’s family still has had no contact with him. He has been held without his most basic human rights. His family has only seen a hostage video and photographs received from unnamed captors. The Iranian authorities have thwarted any attempt for the United States to investigate further, blocked due process in Iranian courts, and allude to a list of demands whenever his name is brought up.

The evidence is conclusive, and we should call this what it is: hostage taking. Since Mr. Levinson disappeared, over 50 people with some connection to a western power have been taken hostage by the Iranian authorities. According to a recent report by the Thomson Reuters Foundation, as many as 20 are still held hostage in Iran.

Over several agonizing years, our loved ones’ cases have each been treated individually, but while they are all unique and complicated cases, this is not an individual problem, it is a pattern; a pattern we call on world leaders to help end. Responsible stakeholders on all sides of this issue know what to do. Please, secure our loved ones’ freedom from Iranian prisons.

Our outreach now is not about international politics. We are a determined group of individuals and families speaking to our governments with one voice, as human beings who have been affected by the horrific situation that the Iranian authorities have created. We are asking for action.

We believe that the Iranian authorities have little incentive to end the cruel and horrific practice of hostage taking as a result of inadequate pressure from the international community. World leaders need to make the political cost for committing human rights violations so high that releasing our loved ones becomes advantageous to the Iranian authorities. We urge all our governments, especially those who enjoy diplomatic relations with the country of Iran, to acknowledge this hostage taking crisis immediately and to take concrete steps that would help resolve these cases.

Do what is in your power to help secure the release of our loved ones and their safe return home by ensuring that their cases are at the top of the agenda of any dialogue with the Iranian authorities. Please act urgently before any more time has passed or pain imparted.

Please clearly and immediately join with us to tell the government of Iran that this behavior will no longer be accepted and must end now. We call on you to send our loved ones home to us.

The families of Robert Levinson, Nizar Zakka, Saeed Malekpour, Kamran Ghaderi, Ahmadreza Djalali, Baquer and Siamak Namazi, and the many more families who remain silent in fear for the safety of their loved ones