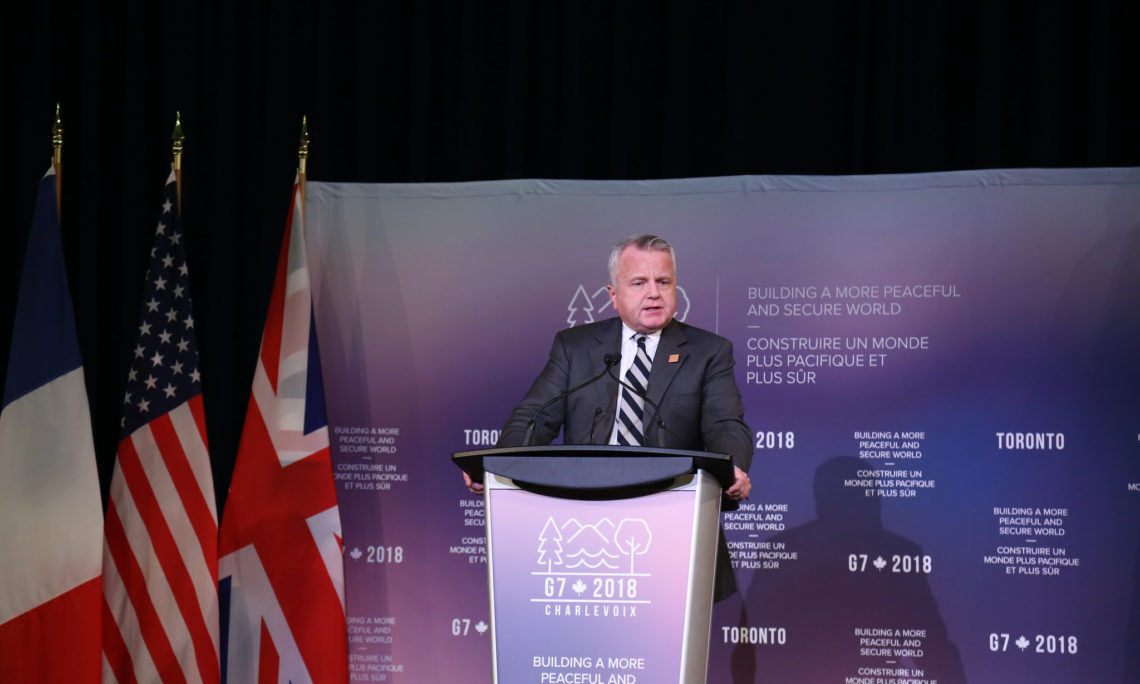 ACTING SECRETARY SULLIVAN: Good afternoon, everyone. It’s a pleasure to be here in Toronto for the G7 ministerial meeting. Toronto is a beautiful city (inaudible) and lovely weather, beautiful facilities here at the university. Very grateful for our hosts here. The Government of Canada and Foreign Minister Freeland has put together a terrific program for us. So on behalf of the United States and President Trump, I want to extend our sincerest appreciation to Canada and to Prime Minister Trudeau and Foreign Minister Freeland for their active leadership of the G7.

The United States wholeheartedly supports the emphasis of our Canadian host on building a more peaceful and secure world for all. We also applaud Canada’s efforts to advance gender equality and women’s empowerment through strategic partnerships that seek to tackle challenges faced by women across the globe.

Our conversations over the past few days have been very productive, and the U.S. remains committed to working closely with our G7 partners on all of the critical issues that we discussed, and we look forward to our leaders building upon our conversations when they gather in Charlevoix in June for the G7 leaders’ conference.

Among the number of shared priorities discussed is our collective commitment to counter transnational terrorists and the criminal networks supporting them. While we have made significant gains against ISIS in Iraq and Syria in cyberspace and in other countries, we cannot stand idly by and assume that it is defeated. We must remain vigilant.

We also remain united in opposition to the DPRK’s continued development of unlawful nuclear and ballistic missile programs. We call for all countries around the world to take action and reinforce this message to Pyongyang and to rigorously enforce the UN Security Council resolutions. International unity is essential as we continue to push diplomatic and economic pressure until the DPRK concedes to complete, verifiable, and irreversible denuclearization.

The G7 countries reaffirm our message to Iran to adhere to international norms and strictly abide by its nuclear-rated – nuclear-related commitments under the JCPOA. The United States calls on all of our partners to continue working alongside us as we counter Iran’s destabilizing activities in the region and hold the Iranian Government accountable for their actions: supporting terrorist organizations, launching cyber attacks, threatening international shipping interests, and committing unconscionable human rights abuses.

Syria was another prominent topic of discussion. On April 13th, the United States, France, and the UK launched strikes on three targets in Syria. These military actions taken together with our allies were a response to the Syrian regime’s use of chemical weapons to kill and injure hundreds of its own people. The images of dead and dying children following the Syrian regime’s most recent chemical attack represented a call to action among the world’s civilized nations. The response of the United States and our key partners was not simply to hold Assad and other Syrian regime officials accountable for the atrocities committed, but also to degrade the regime’s capability to commit them and to deter the use of chemical weapons in the future.

We want to ensure that malicious regimes and terrorists understand this message of deterrence. We’re committed to completing the fight against ISIS and rooting out its remaining havens. The U.S. will remain committed in Syria until ISIS is defeated and the so-called caliphate completely eliminated. We will work to ensure local forces enabled by our regional partners and allies will consolidate these gains, stabilize liberated territories, and prevent the return of ISIS. We will not leave a vacuum that can be exploited by the Assad regime and its supporters.

In parallel, we will work with our partners to invigorate the Geneva political process pursuant to UN Security Council Resolution 2254, and to mobilize the resources needed to address Syria’s urgent humanitarian and stabilization needs. We will seek further contributions in forces, materiel, and money from regional partners and allies in order to sustain the effort in Syria and stabilize liberated territories.

As we work to advance the political process, the United States is committed to ensuring that all Syrians, including the Sunni Arabs, Kurds, Christians, Turkmen, and other minorities in northeast Syria, have a full seat at the table and an appropriate say in their future pursuant to UN Security Council Resolution 2254.

The G7 countries agree that Russia must stop creating impediments to peace and abide by the commitments it entered into under UN Security Council Resolution 2401 and compel the Assad regime to do the same. Russia must be a constructive partner in Syria or will be held accountable. We also stand united in our commitment to hold Russia accountable for its activities in Ukraine. Together, the G7 call on Russia to honor its Minsk commitments, to de-escalate violence, and to return control of Crimea to Ukraine.

In addition to the issues of collective concern I’ve just outlined, over the past few days we also discussed our solidarity on Venezuela, Libya, and many other critical issues on the forefront of the international agenda, including the humanitarian crisis in Burma. Nearly 700,000 people, mostly Rohingya women and children, have fled violence in Burma since August, bringing the total number of refugees hosted in Bangladesh to approximately one million.

In response to this dire situation, I am announcing today that we are providing an additional $50 million in humanitarian assistance from our Bureau of Population, Refugees, and Migration to support a UN-led joint response plan in Bangladesh. This brings the United States response to the Rakhine State crisis in Burma and Bangladesh to more than $163 million since August 2017 and total humanitarian assistance for displaced people in and from Burma to more than $255 million since October 2016.

This assistance will support refugees in Bangladeshi host communities to provide protection, emergency shelter, water, sanitation, health care, and psychological support for people affected by the conflict, as well as to prepare for the impending monsoon and cyclone season, which has the potential to bring significant loss of life, shelter, and access to critical services. We urge other donors to join us in providing additional humanitarian assistance for those affected by this crisis.

With those observations on the topics we’ve covered here at the G7 ministerial meeting, I look forward to taking your questions.

MS NAUERT: Thank you, sir. And with that, we’ll start with Dave Clark from AFP. Dave, go right ahead.

QUESTION: Hi, thank you. Thank you very much. You mentioned in your comments that the G7 members agreed on the importance of holding Iran to its commitments under the JCPOA. Were you able to give a commitment to your allies here that the United States will live up to its commitments under the JCPOA, and in particular to maintain the sanctions waiver on the nuclear-related sanctions after May the 12th? Thank you.

ACTING SECRETARY SULLIVAN: Thank you. Well, as you know, this has been a topic of discussion with our E3 partners. The United States has significant concerns with Iran and its ballistic missiles program, its destabilizing and malign influence in the region – in Yemen, in Syria, and elsewhere – and concerns we have with the JCPOA itself, including its sunset clauses.

President Trump is concerned, very concerned, about Iran’s behavior, malign behavior. His ultimate concern with the JCPOA is the concern for nonproliferation. We – no one wants to see a nuclear-armed Iran. President Trump’s goal in this entire process is to strengthen the JCPOA if it can be strengthened and to protect America and American interests which have been threatened for over 40 years by the regime in Tehran.

It’s something that I’ve lived through my family with. My uncle was the last U.S. ambassador to Iran. He left Tehran – fortunately for him and my family – in the summer of 1979 before his staff was taken hostage on November 4th, 1979 and held in violation of all international norms and basic, basic human dignity, for 444 days by that regime.

So we’re well aware of the problems and the destabilizing and malign influence of Iran, and the President is committed to addressing it. We have discussed that at length with our partners here at the G7 ministerial.

MS NAUERT: Thank you. And our next question goes to Mike Blanchfield from the Canadian Press. Hi, Mike.

QUESTION: Mr. Secretary, we heard earlier today from Boris Johnson and Chrystia Freeland on the G7 efforts on – to call out Russia for its interference in democratic institutions. They’ve talked about a working group that is going to report to the leaders and going to urge them to speak out against the influence of Russia. Russia is a politically charged topic in your country, obviously, especially with the Mueller investigation. How – how committed is your government to this G7 endeavor, and how likely is it that we’ll see President Trump here in Charlevoix standing shoulder-to-shoulder with these G8 – the G7 leaders in calling out Russia?

ACTING SECRETARY SULLIVAN: Well, you made a reference there – you caught yourself when referring to the G8. It’s no longer the G8 for a reason. It’s the G7. We’re committed to addressing all of the abhorrent behavior that we have witnessed particularly recently by Russia, whether it’s at Salisbury, its support for the use of chemical weapons by the Assad regime in Syria.

And the United States has not just undertaken with its – with its allies and partners in the G7 to make statements about this behavior; we have undertaken significant actions in response. As you know, we expelled a large number of undeclared Russian intelligence agents from the United States, imposed sweeping sanctions on Russian oligarchs and Russian institutions, enterprises. So we have taken action. We stand with our G7 allies in confronting Russian malign behavior where – wherever we see it.

Having said that, we also want to work with Russia in areas where we can and need to work with Russia, whether it’s on stability, New START talks, INF Treaty – treaty violation, actually, by the Russians which we need to – need to address, counterterrorism. There are any number of areas where we still need to have a dialogue with Russia, but that will not prevent us from standing up and confronting and taking action against Russian behavior that’s contrary to international norms and all that we stand for in the G7. Thank you.

MS NAUERT: Sir, thank you. Thank you, everyone.