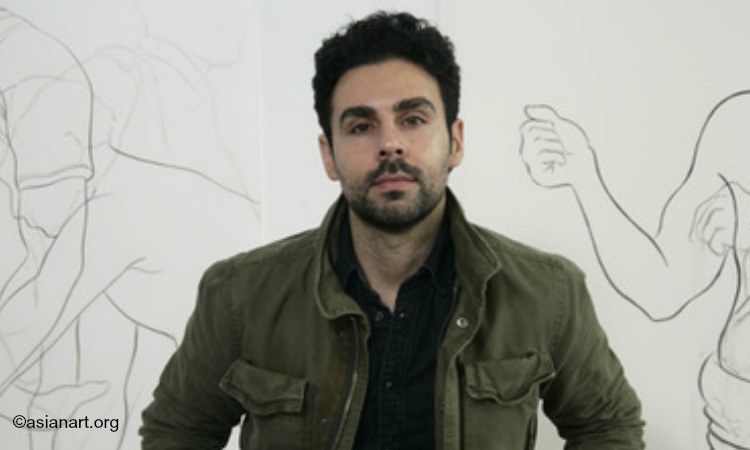 Ala Ebtekar was born in July 21, 1978. He is an American-based visual artist who lives in the San Francisco Bay Area. Ebtekar is known primarily for his work in painting, drawing, and installation that explores the juncture between history and myth, forging a multi-faceted project that melds Persian mythology, science, philosophy and pop culture together.

Ala Ebtekar grew up in the San Francisco Bay Area to parents who immigrated to the United States from Iran. He started drawing at an early age, but in his adolescent years, began to focus his energies on music. In 1992, at age 13, he went through DJ training at KALX90.7 FM, the radio station of the University of California at Berkeley. This experience with music eventually led Ebtekar to the world of graffiti and ultimately back to an interest in visual art. In 1998 he was chosen to participate in a workshop at Zeum Art and Technology Center (now Children’s Creativity Museum) with New York–based artist Tim Rollins and K.O.S. (Kids of Survival) to create work for the center’s inaugural exhibition.

Ebtekar, along with several other young artists from the San Francisco Bay Area, came to form the core unit for a West Coast chapter of KOS. This experience of working with Rollins introduced Ebtekar to the contemporary art world. Rollins’ active mentorship pushed Ebtekar to think more critically and conceptually about his work and to consider applying to an undergraduate art school.

One year later, Ebtekar traveled to Tehran, Iran to visit extended family which led him to return several months later to study art. Initially studying with a traditional Persian miniature painter, Ebtekar soon discovered the mid-20th Century style of qahveh khanehei painting (Iranian coffee house painting), and studied under master qahveh khanehei painter Mohammad “Darvish” Farahani. A style defined as much by its popularity amongst regular folk as its distance from court arts.

In contradistinction to the official court painters of the time, qahveh khanehei painters brought fine art from the exclusive province of those with money and power to the domain of the common people. A singular characteristic of qahveh khanehei painting was its freedom, as artists of this style created their work with neither external themes nor the attention to proper anatomy and perspective as seen in miniature paintings. Qahveh khanehei painters worked entirely from their imagination and creative ability. It’s entirely fitting that Ebtekar found early artistic inspiration from the worlds of graffiti and the modern tradition of qahveh khanehei painting, as his work has encompassed comparable populist sensibilities spanning continents, celebrating the stories and lives of heroic everyday people across time.

Following his experience with Tim Rollins + KOS and studying traditional painting in Iran as a teenager, Ebtekar went on to pursue a formal education in fine arts. In 2002 he received his BFA degree from the San Francisco Art Institute followed by an MFA from Stanford University in 2006.  He served as a Visiting Lecturer at the University of California at Berkeley from 2007 to 2008, and has served as visiting faculty at Stanford University since 2009. Ebtekar’s work has been included in over 70 group exhibitions, 5 two-person exhibitions, and 12 solo exhibitions in California, Texas, Hawaii, Germany and Dubai.