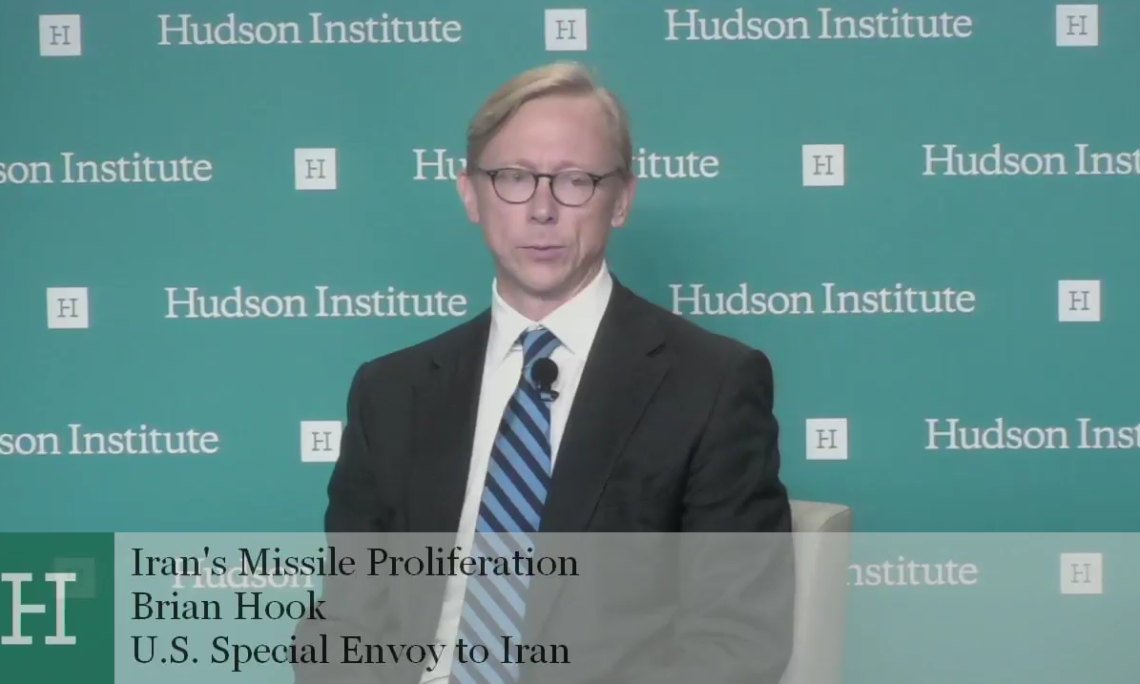 Remarks at the Hudson Institute (As prepared)

Thank you to the Hudson Institute for hosting me today.

I want to especially thank Rebecca Heinrichs for extending the invitation. As many of you know, Rebecca is a thought leader on nonproliferation and national security issues. I have had the opportunity to work with her and the Hudson Institute on a number of occasions over the years and it is a pleasure to be back.

When President Trump first directed his Administration to address the Iran deal’s serious flaws in October 2017, he identified three key deficiencies: the sunset clauses, the inspections regime, and, this “near total silence on Iran’s missile program.”

This last issue – Iran’s missile program – is what I want to discuss with you today.

Its ballistic missile program remains among the most significant challenges to broader nonproliferation efforts in the region and is an enduring threat to our allies and partners, including Israel.

As Secretary Pompeo said in his speech announcing our new Iran strategy in May, Iran must end its proliferation of ballistic missiles and halt further launching or development of nuclear-capable missile systems.

History tells us clearly that advancements in ballistic missile systems often go hand in hand with the development of nuclear weapons.

Since ballistic missiles are the most likely way that Iran would deliver a nuclear warhead, this Administration has been firm on its position that the nuclear issue must be addressed together with Iran’s missile proliferation.

But, the JCPOA, also known as the Iran deal, separated these two issues. It removed Iran’s missile development from the equation and focused on restraining one facet of proliferation at the expense of another.

This was among the deal’s key shortcomings and one of the reasons why the President decided to end our participation in it. The deal failed to protect the American people, in part, because it failed to address Iran’s dangerous spread of missiles across the Middle East.

However, this was not always the case. Prior to the Iran deal, the international community agreed the best way to constrain Iran’s nuclear threat was to also address its long-range ballistic missile capabilities.

Even with this prohibition, Iran proceeded to conduct multiple ballistic missile launches from 2010 to 2016 in clear violation of international law.

But the message sent by the international community was clear nonetheless: Iran cannot be allowed to advance its nuclear program at the same time it is developing its ballistic missile capabilities.

The deal itself failed to include any language constraining Iran’s ballistic missile program. It gave the regime sanctions relief while allowing it to continue to develop and refine its arsenal.

Worse yet, the international community backpedaled on the consensus that Iran’s missiles and nukes should go hand in hand.

UN Security Council Resolution 2231, which formally endorsed the Iran deal and superseded Resolution 1929, contained deluded language that came as welcome news to the Iranians, who lobbied hard for it.

As the resolution now states, Iran is simply “called upon not to undertake any activity related to ballistic missiles designed to be capable of delivering nuclear weapons.”

Let me translate: the international community kindly calls upon the Islamic Republic, the world’s leading state sponsor of terror, to please refrain from bad behavior. But if kind words and good faith worked with the Iranian regime, we would have settled this issue long ago.

The new language is hardly a clear and enforceable prohibition and the Iranians have exploited this ambiguity ever since.

Take for example in July 2017, when Iran tested a Simorgh space launch vehicle. The U.S., France, Germany and the UK all assessed that the launch violated Resolution 2231 because space launch vehicles use similar technology as intercontinental ballistic missiles.

When we took our concerns to the UN, the Russians were more than happy to point out that Resolution 2231, “contained only a call, which by all means was not a prohibition, to refrain from activities related to ballistic missiles capable of carrying nuclear weapons.”

The reality that UN member-states ignore at their peril is that Iran has continued to develop and test ballistic missiles.

In fact, and let me be clear about this, Iran’s pace of missiles did not diminish after the Iran deal was implemented in January 2016, Iran has conducted multiple ballistic missile launches since that time.

We assess that in January 2017, Iran launched a medium-range missile believed to be the Khorramshahr. This missile is designed to carry a payload greater than 500 kilograms and could be used to carry nuclear warheads. Its suspected range also approaches 2,000 kilometers, which is far enough to target some European capitals.

The Islamic Republic maintains the largest underground facility program in the Middle East. It is underground to protect and conceal many aspects of its missile program.

In 2016, Iran unveiled two new short-range ballistic missiles, which it claims are capable of striking targets between 500 to 700 kilometers. Tehran also claims it is pursuing long-range, precision guided cruise missiles, which will present an increased threat to our allies in the region.

Iran is also in the business of supplying missiles to its proxies across the Middle East.  As I am sure you have seen, recent media reports have suggested that Iran is transferring ballistic missiles to Shia militias in Iraq. These claims are all the more serious when you take into account the life-threatening and provocative attacks on U.S. diplomatic facilities recently in Baghdad and Basra, which Iran did nothing to stop.

As the President has said, the United States will hold the regime in Tehran accountable for any attack that results in injury to our personnel or damage to United States Government facilities.  America will respond swiftly and decisively in defense of American lives.

In Lebanon, we have evidence Iran is helping Hizballah build missile production facilities.

There is also mounting evidence that Iran is providing ballistic missile technology to the Houthis in Yemen.  Analysis of debris recovered from a November 2017 strike close to the international airport in Riyadh indicates that the missile was of Iranian origin. A company logo with the letters SBI, which matches that of the Iranian company Shahid Bagheri [Sha-heed Boo-Gary] Industries, is written on the missile. As UN Ambassador Nikki Haley said in response to the attack, “imagine if this missile had been launched at Dulles Airport or JFK, or the airports in Paris, London, or Berlin.”

This is the kind of activity Iran is supporting, and it is continuing to support every day. So what is the United States and its allies doing to address it?

For starters, we ended the practice of simply admiring the problem.

Secretary Pompeo launched a multi-pronged pressure campaign that reflects the President’s goal of protecting the American people and our allies from this outlaw regime.

First, we are using the full scope of our sanctions authorities to inflict real costs on Iran’s ballistic missile program.

In March 2017 and April 2018, the U.S. imposed sanctions against a total of 19 foreign entities for transferring equipment to Iran’s missile program.  In July 2017, we designated 18 entities and individuals under Executive Order 13382 for supporting Iran’s ballistic missile program or otherwise facilitating the regime’s military procurement. In January 2018, the U.S. designated four additional entities in connection with Iran’s ballistic missile program under this same Executive Order.

In May 2018, we designated five Iranian individuals for providing ballistic missile-related technical expertise to the Houthis. The individuals were also responsible for transferring weapons to Yemen on behalf of the IRGC’s Qods Force.

While we are sanctioning Iran’s missile activity, our economic pressure is much broader.  The U.S. is re-imposing sanctions that were lifted or waived as part of the nuclear deal; the first of these went into effect on August 7th, and the remainder will be re-imposed on November 5th.

We intend to get global Iranian crude oil imports as close to zero as possible by November 4th to deny the regime revenue to fund its foreign operations. As part of our campaign to stop the Iranian regime’s funding of terrorism, we also jointly disrupted with the UAE a currency exchange network that was transferring millions to the Qods Force.

Regime leaders should feel painful consequences for their violence, bad decision-making, and corruption. Our aggressive re-imposition of sanctions is aimed at forcing Iran to choose whether it should cease its destabilizing activities or face growing economic pressure and diplomatic isolation.

Second, we are working multilaterally to constrain Iran’s missile program and bring allies and partners on board our campaign.

We are coordinating with allies to interdict missile-related transfers and target Iranian missile proliferation activities in third countries. We understand the need to strengthen deterrence in the region to dissuade Iran from spreading its missile threat.

We also participate in the Missile Technology Control Regime and the Hague Code of Conduct Against Ballistic Missile Proliferation to target Iran’s missile development programs, choke point technologies, and procurement strategies, and to press countries to take steps to impede Iran’s acquisition of missile technology.

Many other nations already have common understandings of the threat Iran poses beyond its nuclear aspirations – this was clear in our negotiations with our allies before the President pulled out of the deal. We want more of them to join us in confronting the array of Iran’s malign activity.  We are asking every nation that can no longer tolerate the Iran’s destructive behavior to protect its people by joining us.

Finally, while not directly related to the missile issue, another critical component of our pressure campaign is Secretary Pompeo’s commitment to exposing the regime’s brutality and standing with the Iranian people. The Iranian people themselves deserve to know the high level of self-interest that fuels the regime’s actions.

We will continue to expose the regime’s corrupt monopolies, malign activities, crooked self-dealings, and outright oppression.

As the Secretary did during his trip to the Reagan Library, he will continue to engage with the Iranian diaspora.

Secretary Pompeo’s goal is a comprehensive deal with Iran that addresses the full scope of its destabilizing behavior. We ask the Islamic Republic to behave like a normal country, so that it can enjoy the privileges of a normal country.

With regard to missiles, this means returning to the pre-JCPOA consensus: Iran’s nuclear proliferation and development of ballistic missiles must be addressed together, not separately.

Placing temporary limits on Iran’s nuclear program while allowing the regime to develop and proliferate ballistic missiles is a failed policy that the world cannot continue.

It is time for all nations to join us in holding Iran to a new level of accountability for its destructive behavior, especially its lawless pursuit of ballistic missiles.