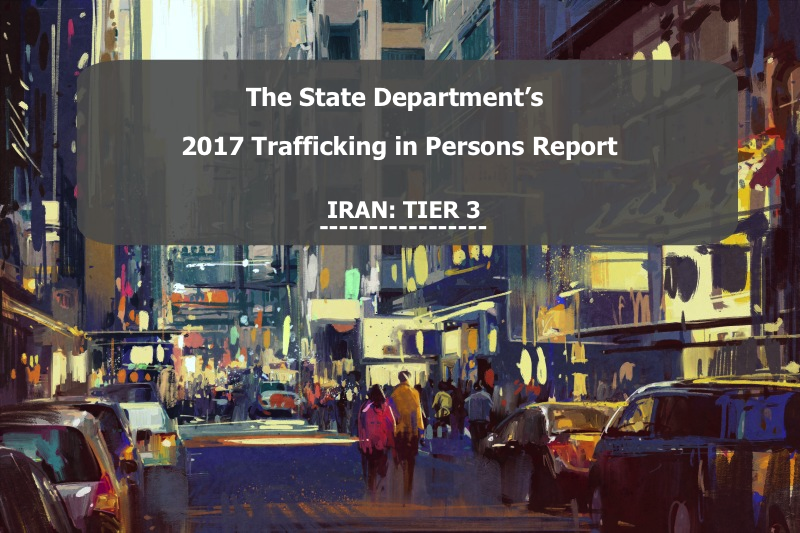 The Government of Iran does not fully meet the minimum standards for the elimination of trafficking and is not making significant efforts to do so; therefore, Iran remained on Tier 3. Despite the lack of significant efforts, the government took some steps to address trafficking, including operating some centers where trafficking victims reportedly could receive assistance. The government also agreed to improve cooperation with a few countries in the region to combat trafficking. However, as in previous reporting periods, the government did not share information on its anti-trafficking efforts. Public information from NGOs, the media, and international organizations indicate the government did not take significant steps to address its extensive trafficking problem. Trafficking victims remained highly vulnerable to punishment, including death, for unlawful acts committed as a direct result of being subjected to trafficking. Allegations continued that Iranian officials coerced Afghan men into combat roles in Syria, and the Iranian government provided financial support to militias fighting in Iraq that recruited and used child soldiers.

Cease coercing individuals into combat in Syria and cease support for armed militias that recruit and use children in Iraq; ensure sex and labor trafficking victims are not punished for unlawful acts committed as a direct result of being subjected to trafficking; while respecting due process, investigate and prosecute sex trafficking and forced labor cases; institute procedures to identify trafficking victims, particularly among vulnerable populations such as persons in prostitution, street children, and undocumented migrants; offer specialized protection services to trafficking victims, including shelter and medical, psychological, and legal assistance; develop partnerships with international organizations to combat trafficking; increase transparency of anti-trafficking policies and activities; and become a party to the 2000 UN TIP Protocol.

As reported over the past five years, Iran is a source, transit, and destination country for men, women, and children subjected to sex trafficking and forced labor. Organized groups reportedly subject Iranian women, boys, and girls to sex trafficking in Iran, Afghanistan, the Iraqi Kurdistan Region (IKR), Pakistan, United Arab Emirates (UAE), and Europe. Some Iranian women, who seek employment to support their families in Iran, are vulnerable to sex trafficking. Iranian girls between the ages of 13 and 17 are targeted by traffickers for sale abroad; younger girls may be forced into domestic service until their traffickers consider them old enough to be subjected to child sex trafficking. In 2016, there was a reported increase in young Iranian women in prostitution in Dubai; some of these women may be trafficking victims. From 2009-2015, the transport of girls from and through Iran en route to other Persian Gulf states for sexual exploitation reportedly increased. Iranian girls were subjected to sex trafficking in brothels in the IKR, especially Sulaimaniya; in some cases this exploitation was facilitated by Iranian trafficking networks. In 2015, the media reported Kurdistan Regional Government officials were among the clients of these brothels. In Tehran, Tabriz, and Astara, the number of teenage girls exploited in sex trafficking reportedly continues to increase. “Temporary” or “short-term” marriages lasting from one hour to one week—for the purpose of commercial sexual exploitation—are reportedly increasing in Iran. Trafficking rings reportedly use Shiraz, Iran, as a transit point to bring ethnic Azeri girls from Azerbaijan to the UAE for commercial sexual exploitation. Street children in Iran are highly vulnerable to trafficking. Organized criminal groups kidnap or purchase and force Iranian and migrant children, especially Afghan refugee children, to work as beggars and street vendors in cities, including Tehran. These children, who may be as young as three years old, are coerced through physical and sexual abuse and drug addiction. Afghan migrants and refugees, including children, are highly vulnerable to forced labor, debt bondage, and sex trafficking, while Pakistani migrants are also vulnerable to forced labor in Iran. Afghan boys in Iran are vulnerable to sexual abuse by their employers and harassment or blackmailing by the Iranian security service and other government officials. Traffickers subject Afghan migrants, including children, to forced labor in construction and agriculture in Iran. Trafficking networks smuggle Afghan nationals living in Iran to Europe and force them to work in restaurants to pay off debts incurred by smuggling fees. Pakistani men and women migrants in lowskilled employment, such as domestic work and construction, are targeted by organized groups and subjected to forced labor, debt bondage, restriction of movement, non-payment of wages, and physical or sexual abuse. Increasingly, despite labor code protections for registered foreign workers, employers seek adjustable contracts that increase these workers’ vulnerability to exploitative work practices such as coerced overtime and IRAQ denial of work benefits. In 2016, an international organization and the media reported the Iranian government and the Islamic Revolutionary Guards Corps (IRGC) coerced male Afghans resident in Iran, including migrants and refugees, to fight in military brigades deployed to Syria by threatening them with arrest and deportation to Afghanistan. In 2015 and 2016, the Iranian government provided funding to the militia Asa’ib Ahl al-Haq—also known as the League of the Righteous—which reportedly organized training camps for high school and university students, some of whom may be under the age of 18, in southern Iraq. According to an Iraq-based source, the Iranian government also provides funding to the militia Abu Fadhl al-Abbas Brigades, which used children in combat on the front-line in Fallujah, Iraq.