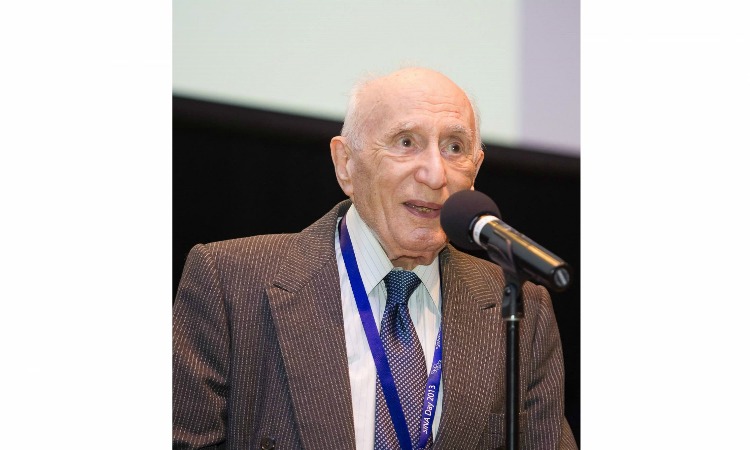 Ehsan Yarshater was born in April 3, 1920 and is the Iranian-American founder and director of The Center for Iranian Studies, and Hagop Kevorkian Professor Emeritus of Iranian Studies at Columbia University. He was the first full-time professor of Persian Studies at a U.S. university since World War II.

Born in Hamedan, Iran to a middle class family, Ehsan Yarshater studied Persian language and literature at the University of Tehran and Iran philology (Old and Middle Iranian) at the School of Oriental and African Studies (SOAS), University of London with Walter Bruno Henning.

In 1968 Yarshater founded The Center for Iranian Studies in New York. He bought Mr. Saeed Nafisi’s personal library and donated it together with his personal library to the center. At this center he tried to translate Iranian classic literature pieces to Western languages and Japanese. This foundation is still active in Iranian studies and is still under supervision of Yarshater in New York.

In 1974, the Iranian Planning and Budget Organization agreed to give Mr. Yarshater $2 Million to start the Encyclopedia Iranica. By 1979, when the Iranian Islamic revolution happened, he had published 10 volumes of this encyclopedia. After the revolution and moving to the U.S., Ehsan Yarshater managed to convince the US National Endowment for the Humanities to accept the expenses of this encyclopedia and the work on it continued. He also sold several historical items from his collection for $3 million to fund the encyclopedia.

Today he is one of the 40 editors of the Encyclopædia Iranica, with articles by 300 authors from various academic institutions. He also edited the third volume of the Cambridge History of Iran, comprising the history of the Seleucid, the Parthians, and the Sassanians, and a volume entitled Persian Literature. He is also an editor of a sixteen-volume series named History of Persian Literature. He has won several International awards for scholarship, including a UNESCO award in 1959, and the Giorgio Levi Della Vida Medal for Achievement in Islamic Studies from UCLA in 1991. Lecture series in his name have been instituted at the University of London, and the University of California, Los Angeles, and at the Centre National de Recherche Scientifique in Paris.