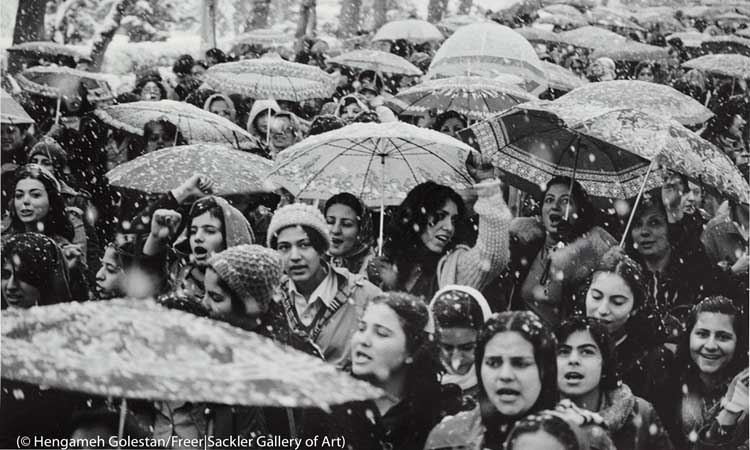 Themes of fortitude, hope and defiance are reflected in My Iran: Six Women Photographers, a new photo exhibit at the Smithsonian Institution in Washington.

Hengameh Golestan is one of the few documentary photographers to capture the women’s protests during the Iranian Islamic Revolution of 1979 over the law forcing them to wear a headscarf in public, as seen in the photo above. Women in Iran are still protesting this issue today. The Iranian Islamic Revolution wiped out many rights that Iranian women had. Golestan, born in Tehran in 1952, has spent most of her career traveling throughout Iran taking photos of women engaged in everyday domestic activities.

The images in the exhibit represent the museum’s growing collection of some of the best contemporary Iranian photographers. Here are a few:

Shadi Ghadirian’s work (above) focuses on young Iranian women after the revolution and the tension between tradition and modernity. Notice the modern object the women hold in the historical setting. Ghadiran was born in 1974 in Tehran, where she lives and works today.

The work above is from Mitra Tabrizian’s Border series, showing Iranians in exile. The man in the photo on the right is a former soldier in Iran’s Imperial Army, now a mechanic in London. Tabrizian is an exile herself. Born in Tehran in 1956, she now lives in London.

The work of Gohar Dashti, born in southwest Iran in 1980, portrays contemporary life in Iran. “I strive to make the invisible in Iran visible to the rest of the world,” Dashti said, as quoted by Massumeh Farhad, chief curator of Islamic art at the Smithsonian’s Freer and Sackler galleries. Dashti lives in Tehran.

The exhibit celebrates the tremendous contribution of Iranian women and “offers a unique perspective both from inside and outside the country,” Farhad says. Four of the female photographers live and work in Iran, while two are exiles living in Europe.