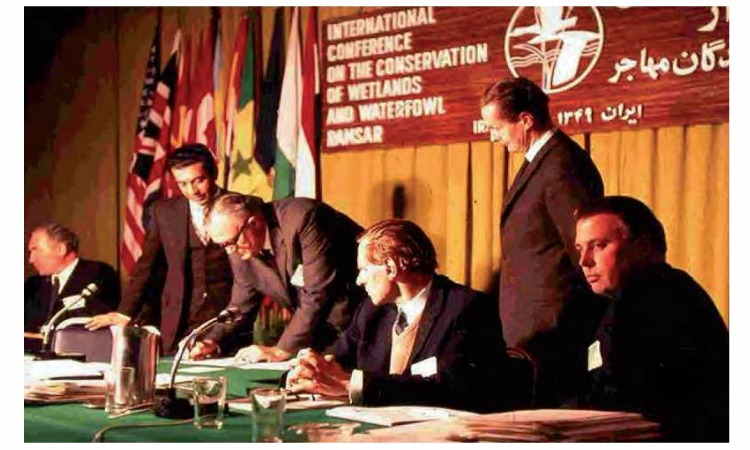 Eskandar Firouz, second from left, watches as delegates sign the Convention on Wetlands of International Importance on February 2, 1971, in Ramsar, Iran.

By Louise Fenner | Staff Writer
Washington — Eskandar Firouz helped pioneer Iran’s environmental movement in the 1960s and played an important role in the enactment of an international treaty to protect the world’s wetlands. But today in Iran, many wetlands are imperiled, lakes are drying up and natural habitats are being destroyed.
To generate electricity and support intensive agriculture, dams are being built “without thought to their feasibility, let alone the impact on the environment,” said Firouz, founding director of Iran’s Department of the Environment, in an interview.
In many places, he said, “there’s a desert where there was a lake before — a wasteland.”
Many Iranians are aware of the environmental damage, Firouz said, noting that “the biggest dam in Kuzestan has been attacked right and left over the risk of salination of the Karun River” in southwestern Iran. International media report the shrinking and imminent drying up of Lake Urmia (Oroumiyeh) in the northwest.
In 1971, there were few trained biologists or wildlife managers, Firouz said. “There was no such thing as ‘ecology’ in Iran, indeed in most countries. The environmental movement was just beginning in the United States and Europe.”
Things have changed. Today, Iranians “are trying to inveigle the government to do the right thing,” Firouz said, and many young Iranians are studying conservation and environmental management. “Their ardor is amazing and gratifying.”
IRAN ONCE LED THE WAY IN WETLANDS CONSERVATION
In 1956, Firouz helped found the Game Council of Iran with a group of sportsmen, including Manouchehr Riahi, who became its first secretary-general. The council succeeded in having hunting and fishing regulated by licensing. Although Firouz started out as a hunter, he gradually developed a love for nature, a passion he describes as “something that seemed to be part of my genetic makeup.”
He helped draft a law — and worked to secure its passage in parliament — that created the Game and Fish Department in 1967. It had a great deal more authority to protect Iran’s wildlife and habitat. One goal was maintaining Iran’s vast wetlands, which provide critical habitat for waterfowl, including migrating species.
“Iran is one of the important flyways in the world for waterfowl,” Firouz said.
The department collected data on waterfowl populations and provided it to international groups concerned with wetlands conservation. “Iran was very much a pioneer in the field of conservation in the region, especially in the Middle East and Southwest Asia,” he said.
Firouz obtained the services of David Ferguson, a young American wildlife manager who had come to Iran with the Peace Corps. Ferguson led the effort to count and band waterfowl (place identification bands on the birds’ legs) and track migration patterns.
“There wasn’t too much [data] coming out of the other countries in the region,” Ferguson said in an interview. “There was a recognition that Iran was a really important cog in the field of migratory waterfowl and wetland conservation.”
THE RAMSAR CONVENTION
Iran was asked to host an international conference on wetlands conservation in early 1971. Firouz headed the meeting, which was held in Ramsar, on the Caspian coast. There, the final text of the “Convention on Wetlands of International Importance,” commonly known as the Ramsar Convention, was adopted. It had taken years of negotiations to accomplish.
It almost didn’t happen. Political differences between the Soviet Union and the 17 other countries represented at the Ramsar meeting could have derailed the agreement, had it not been for Firouz. He hosted the Soviet delegate, V.D. Denisov, for dinner the night before the final vote on the agreement. It took a lot of hospitality and hours of talk to convince Denisov to compromise.

The next morning “there was this look of gloom all around the hall,” Firouz recalled. “Everybody thought that once again there was no agreement.”
Then Denisov announced that the Soviet Union would sign the wetlands convention (and would state its objections in the Final Act). “The gloom was transformed into rapturous applause. They were overwhelmed, they hadn’t expected this,” Firouz said.
In 1971, Firouz became head of Iran’s new Department of the Environment, a post he held for six years. He said he is particularly proud of his role in creating the roster of protected areas in Iran, which included most of the wetlands. “Some of the areas in our country were among the finest in the world,” he said.
Iran has designated 24 “wetlands of international importance” under the Ramsar Convention. But many are drying up, Firouz said. “As far as I’m concerned, they have been reduced to wetlands of very little importance.”
A meeting of the parties to the Ramsar Convention is scheduled for July 6–13 in Bucharest, Romania (there are now 162 contracting parties). Iran will be represented. Firouz said he hopes “that something will rub off on [the Iranians] insofar as protection and their duties are concerned.”
Migrating birds know no boundaries, he said. “If countries don’t work together to protect wetlands, it just breaks the link and we lose an irreplaceable and vital natural heritage.”
See “Iran Was Pioneer in Wetlands Conservation in 1971” and the Ramsar Convention website. A listing of Ramsar sites in Iran is available on the Ramsar Convention website.