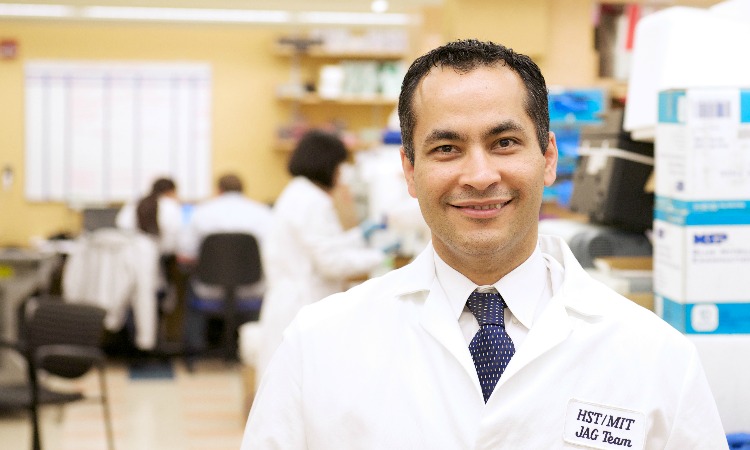 Ali Khademhosseini is a Professor at Harvard Medical School (HMS) and a faculty at the Harvard-MIT’s Division of Health Sciences and Technology (HST), Brigham and Women’s Hospital (BWH) and as well as an Associate Faculty at the Wyss Institute for Biologically Inspired Engineering.  He is also a Junior Principal Investigator at Japan’s World Premier International – Advanced Institute for Materials Research (WPI-AIMR) at Tohoku University where he directs a satellite laboratory. In addition, he is an eminent scholar at Konkuk University in Korea, as well as a Hi-Ci Professor at King Abdulaziz University in Saudi Arabia.

His research is bsed on developing micro- and nanoscale biomaterials to control cellular behavior with particular emphasis in developing engineered materials and systems for tissue engineering.  He is also developing ‘organ-on-a-chip’ systems that aim to mimic human response to various chemicals in vitro. In addition, his laboratory is developing technologies to control the formation of vascularized tissues with appropriate microarchitectures as well as regulating stem cell differentiation within microengineered systems. He has also pioneered various high performance biomaterials for medical applications that are currently being pursued for clinical translation.  He has edited multiple books / journal special issues and is an author on >450 peer-reviewed journal articles, editorials and review papers, >60 book chapters/edited books and >20 patent/disclosure applications.  His work has been published in leading journals and routinely highlighted in international media.  He has been cited ~25,000 times and has an H-index of 83.  Also, he has given over >250 invited seminars and keynote lectures. In 2014, 2015, and 2016 he was also selected by Thomson Reuters as one of the World’s Most Influential Minds.

Dr. Khademhosseini’s interdisciplinary research has been recognized by over 40 major national and international awards. He is the recipient of the Presidential Early Career Award for Scientists and Engineers (PECASE), the highest honor given by the US government for early career investigators. He has also received the Victor K. Lamer Award, the Unilever Award, and the BIOT Young Investigator Award of the American Chemical Society (ACS), the International Union of Pure and Applied Chemistry (IUPAC) Polymer Award and has been recognized by major governmental awards including the National Science Foundation (NSF) Career Award and the Office of Naval Research Young Investigator Award.  In 2007, he was named a TR35 recipient by the Technology Review Magazine as one of the world’s top young innovators. In 2011, he received the Pioneers of Miniaturization Prize from the Royal Society of Chemistry (RSC) for his contribution to microscale tissue engineering and microfluidics. He is a fellow of the American Institute of Medical and Biological Engineering (AIMBE), Biomedical Engineering Society (BMES), Royal Society of Chemistry (RSC), Biomaterials Science and Engineering (FBSE), NANOSMAT Society and American Association for the Advancement of Science (AAAS).

Dr. Khademhosseini is an Associate Editor for ACS Nano.  Previously, he served as the Research Highlights editor for Lab on a Chip.  He is on the editorial boards of numerous journals including Small, RSC Advances, Advanced Healthcare Materials, Biomaterials Science, Journal of Tissue Engineering and Regenerative Medicine, Biomacromolecules, Reviews on Biomedical Engineering, Biomedical Materials, Journal of Biomaterials Science-Polymer Edition and Biofabrication. He is the chair of the Bionanotechnology Technical Activities Committee for the IEEE-EMBS.   He is a standing member of the NIH BTSS (Bioengineering, Technology and Surgical Sciences) study section.  He received his Ph.D. in bioengineering from MIT (2005), and MASc (2001) and BASc (1999) degrees from University of Toronto both in chemical engineering.

2014 American Association for the Advancement of Science (AAAS) Fellow

2011 Pioneers of Miniaturization Prize—Royal Society of Chemistry’s Lab on a Chip/Corning Inc.