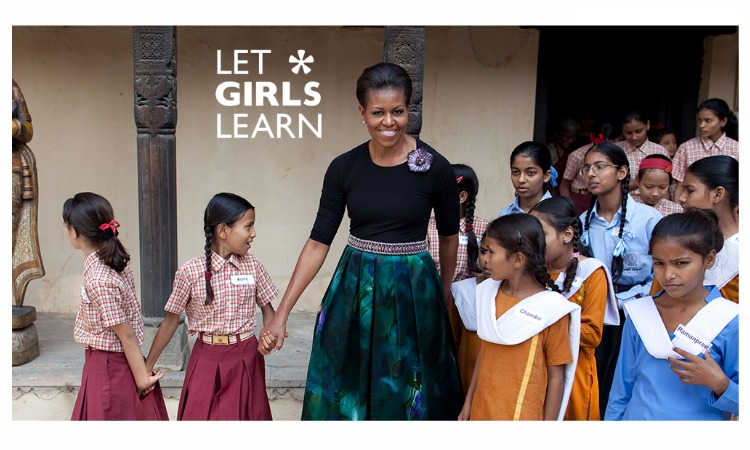 Right now, 62 million girls worldwide are not in school. They’re receiving no formal education at all — no reading, no writing, no math — none of the basic skills they need to provide for themselves and their families, and contribute fully to their countries.

Often, understandably, this issue is framed as a matter of resources — a failure to invest enough money in educating girls.

That’s why, last spring, the president and I launched Let Girls Learn, a new initiative to fund community girls’ education projects like girls’ leadership camps and school bathrooms; educate girls in conflict zones; and address poverty, HIV, and other issues that keep girls out of school.

We cannot address our girls’ education crisis until we address the broader cultural beliefs and practices that can help cause and perpetuate this crisis. And that is precisely the message I intend to deliver this week when I travel to the Middle East.

We know that legal and cultural change is possible because we’ve seen it in countries around the world, including our own. A century ago, women in America couldn’t even vote. Decades ago, it was perfectly legal for employers to refuse to hire women, and domestic violence was seen not as a crime, but as a private family matter. But in each generation, brave people — both men and women — stood up to change these practices. They did it through individual acts like taking their bosses to court, fighting to prosecute their rapists, and leaving their abusive husbands — and through national movements and legislation that brought changes.

Girls who are educated marry later, have lower rates of infant and maternal mortality, and are more likely to immunize their children and less likely to contract HIV. Educated girls also earn higher salaries and studies have shown that sending more girls to school can boost an entire country’s GDP.

As I’ve traveled the world, I have met so many of these girls. I’ve seen firsthand that every single one of them has the spark of something extraordinary inside of them, and they are so hungry to realize their promise. We should never have to accept our girls having their bodies mutilated or being married off to grown men as teenagers, confined to lives of dependence and abuse.

As a first lady, a mother, and a human being, I cannot walk away from these girls, and I plan to keep raising my voice on their behalf for the rest of my life.