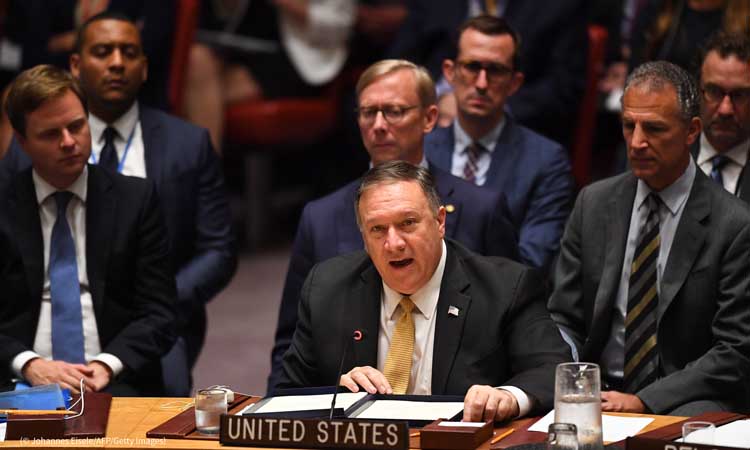 Peace and security. That’s the vision of Middle East peace advanced by the U.S. and dozens of partners. Iran has a different vision, one where the mullahs in Tehran use violence to extort concessions from the international community.

U.S. Secretary of State Mike Pompeo made this clear during August 20 remarks to the United Nations Security Council in New York. He contrasted the collaborative, multinational approach of the “Warsaw Process” with the Iranian regime’s “campaign of extortion diplomacy.”

The Warsaw Process seeks to boost maritime security, aid refugees and secure human rights. More than 60 nations attended the first meeting in February, and nearly 80 are invited to planned October and November meetings in Korea, Bahrain, Poland and Romania.

“No one country will be the subject of these discussions,” Pompeo told the Security Council, adding that the talks will be collaborative. “All nations will be heard.”

The clock is ticking. Time remaining before the UN arms embargo on Iran expires and Qasem Soleimani’s travel ban ends. We urge our allies and partners to increase the pressure on the Iranian regime until it stops its destabilizing behavior. https://t.co/oxsXNiJ4Q3 pic.twitter.com/o4HpES3GKs

Meanwhile, the United States and other Warsaw Process countries used the August 20 U.N. meeting to hold talks on boosting economic opportunity, resolving humanitarian crises in Syria and Yemen, and brokering peace between Israel and the Palestinians.

Those talks built on a June meeting in Bahrain, which focused on the United States’ $50 billion “Peace to Prosperity” plan for Palestinians. More recently, the United Kingdom and the Kingdom of Bahrain joined a U.S. initiative to protect shipping in the Strait of Hormuz.

“These are precisely the kinds of multilateral efforts the United States supports,” Pompeo said. “They’re meaningful, they’re effective, and they reflect the values of freedom-loving societies, which this council should be working to uphold.”