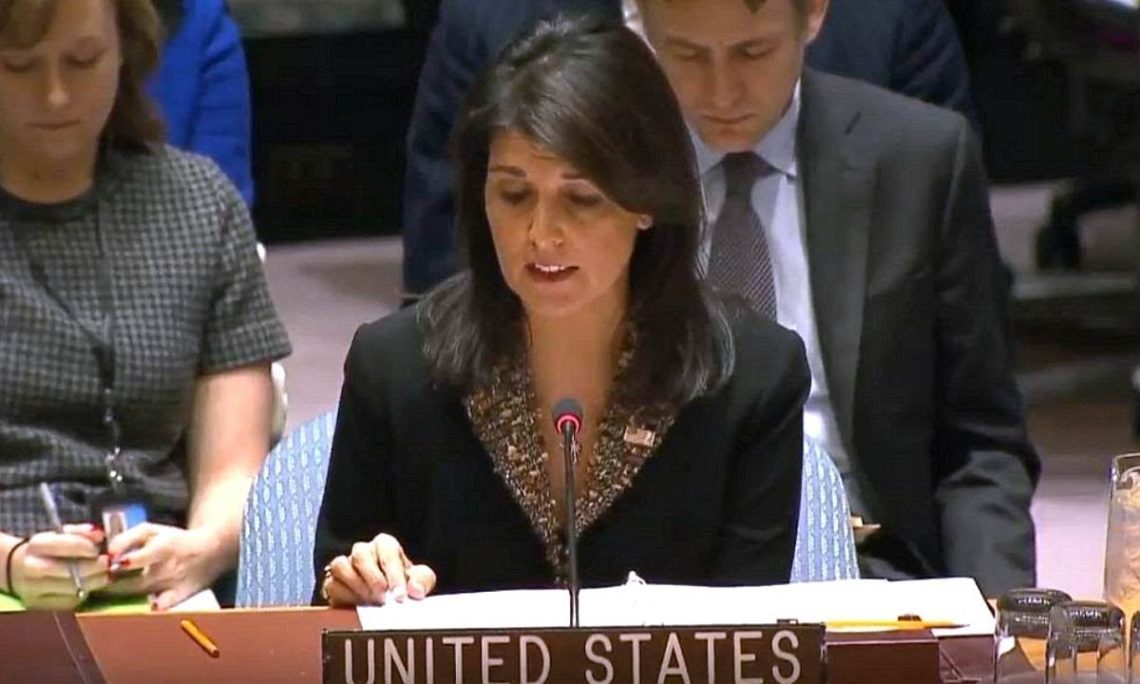 Thank you, Mr. President. Mr. Lowcock, thank you for your briefing, and Special Envoy Griffiths, the United States welcomes you to this Council. You have taken on one of the world’s most difficult diplomatic assignments, and we thank you for it. The United States fully supports your efforts to find a political solution to the conflict in Yemen. We especially appreciate that you have quickly reached out to all of the Yemeni parties involved. We hope that all parties will engage the UN without preconditions going forward.

Yemen is an issue where it should be easy for all of us on this Security Council to agree. Yemen isn’t Syria. We agree that there needs to be peace in Yemen, and that this war has taken a horrifying toll on the Yemeni people. Government services, like schools, hospitals, and clean water, barely exist anymore.

This chaos is the perfect environment for terrorist groups like Al-Qaida and ISIS to find safe haven and plan attacks that could threaten us all. Finding peace is urgent. But pushing for peace also requires that we do not reward bad behavior. Iran and the Houthis, in particular, need a much better understanding of our seriousness when it comes to their destabilizing activity. Just because we aim for peace does not mean we look the other way when they take steps to make this war even worse.

To achieve enduring peace in Yemen, Iran must stop its interference and its violations of the arms embargo this Council imposed. Last week, the Houthis launched yet another round of ballistic missiles at Saudi Arabia. At the end of March, debris from a Houthi missile attack against the capital of Saudi Arabia killed a civilian. We have warned before that it was only a matter of time before the Houthi attacks caused civilian casualties in Saudi Arabia.

Now, that prediction has come true.

Each day that goes by the risk of greater regional conflict increases. And yet this Council has not acted to hold the Houthis and Iran accountable for weapons that violate the arms embargo and Security Council Resolution 2216.We all went to Washington D.C. to see these missiles first hand. To see how the missiles found in Saudi Arabia originated in Iran. Then the independent and impartial UN panel of experts backed up what we showed you and confirmed Iran’s non-compliance with resolution 2216.

The evidence is there and it is strong. The Houthis didn’t just figure out on their own how to build and fire ballistic missiles more than a thousand kilometers to hit the Saudi capital. Iran is supporting them. This Council taking action to stop the flow of arms to the Houthis would be a step forward helping to resolve this war. The Houthis must realize that if they continue to use banned weapons in war the international community will be united in condemning them. The United States supports the ability of our Saudi partners to defend their borders against these threats. We will continue pushing in this Council for real accountability.

The Houthis are showing no sign of stopping their missile launches toward Saudi Arabia. It is imperative that this Council come together to make clear that these provocations are unacceptable. We hope that all parties, especially the Houthis, see the arrival of Mr. Griffiths as a chance to start down a new path. It is long past time for all parties to show flexibility and restraint in the service of a real negotiated settlement. I suspect that if we could hear from ordinary Yemenis, that’s the same message they would be sending.

The UN has emphasized the dire humanitarian stakes. The bottom line is that 18 million Yemenis do not know where their next meal will come from. Something has to change.

That’s why the United States emphasizes once again that all parties must do more to expand access for commercial goods and humanitarian aid to reach the Yemeni people. We are doing our part. We funded four mobile cranes for the port of Hudaydah, which we expect will increase the flow of goods through the port. The United States also supports the UN Verification and Inspection Mechanism as a tool that helps address the threat of weapons smuggling, while also helping get ships with legitimate cargo to Yemen.

It is vital that the port of Hudaydah remains open to commercial and humanitarian traffic, and we appreciate the steps that the parties have taken to keep the port functioning. Beyond reaching the port, aid workers should be able to move freely throughout the country to deliver the humanitarian assistance to those in need.

The United States has also joined donors in taking steps to respond to this humanitarian crisis. We have announced almost $87 million in humanitarian aid to Yemen this fiscal year. We applaud Saudi Arabia and the UAE in particular for putting forward almost a billion toward the UN’s humanitarian response.

As long as the war continues, the parties must take care in the way they plan and carry out attacks to reduce human suffering on the ground. We have called on all parties to take appropriate measures to mitigate the risk of civilian casualties and damage to civilian infrastructure.

The United States is working to offer support to the Saudi-led Coalition, while minimizing civilian casualties. The Houthis must halt their indiscriminate shelling and ensure that humanitarian aid is delivered without any diversion or delays. The war in Yemen is at a critical turning point. We have a new envoy ready to promote peace.

This Council can take steps to address the Houthi ballistic missile provocations, promote humanitarian access, and support a return to talks. These are the goals that all of us ought to share. So we should not hesitate to take action as a Security Council to achieve them.

That means not being afraid to call out the Houthis and their Iranian patrons by name in future resolutions. That means actually leaning on the parties to negotiate in good faith in the UN process. That means responding generously to the UN’s humanitarian appeals, and standing by our demands for unfettered humanitarian access. If we do these things, we can lay the groundwork for an enduring political settlement.