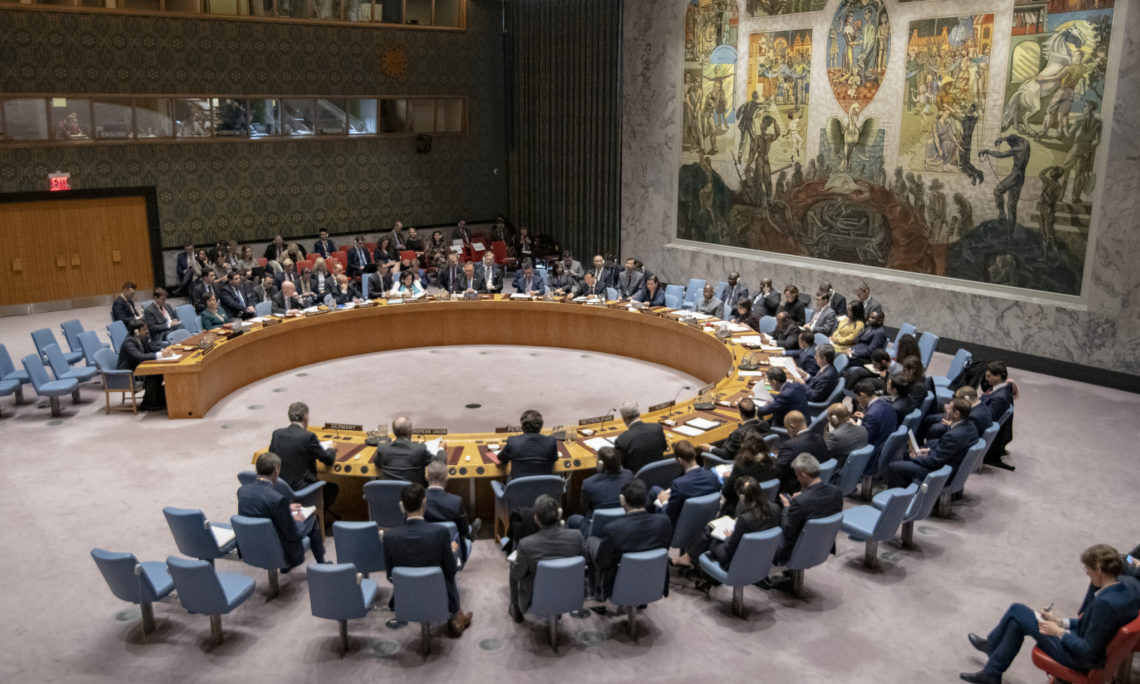 SECRETARY POMPEO: Thank you very much, and good morning. Thank you for the kind words. I appreciate them.Just two days ago, the head of the IRGC’s airspace division, Amir Hajizadeh, boasted that Iran is capable of building missiles with a range beyond 2,000 kilometers. He said, quote, “We have the ability to build missiles with broader ranges. We don’t have limitations from a technical perspective.” End of quote. He also said there are many “enemy bases” within 800 kilometers of Iran – in other words, within striking distance of Iranian missiles. He bragged that Iran does 40 to 50 tests per year.

As I’ll talk about further, it is clear that the Iranian regime’s ballistic missile activity has grown since the nuclear deal. Iran has exploited the goodwill of nations and defied multiple Security Council resolutions in its quest for a robust ballistic missile force. The United States will never stand for this.

No nation that seeks peace and prosperity in the Middle East should either.

Since 2006, this Council has been telling Iran to stop testing and proliferating ballistic missiles in one form or another. From 2010 to 2015, Iran was subject to UN Security Council Resolution 1929 – the strictest resolution addressing the Iranian ballistic missiles to date.

In that resolution, the Security Council decided that, “Iran shall not undertake any activity related to ballistic missiles capable of delivering nuclear weapons, including launches using ballistic missile technology, and that States shall take… necessary measures to prevent the transfer of technology or technical assistance to Iran related to such activities.” This provision of UNSCR 1929 imposed a legal prohibition on Iran’s ballistic missile activity. There was force of law behind these words.

Nevertheless, Iran conducted multiple ballistic missile launches between 2010 and 2015, in flagrant violation of that resolution.

In connection with the Iranian regime’s engagement in nuclear talks, and at the Obama administration’s urging, the Security Council replaced Resolution 1929 with Resolution 2231. Resolution 2231 “calls upon” Iran not to undertake any activity related to ballistic missiles designed to be capable of delivering nuclear weapons. Notwithstanding that change in language, the world’s concerns remain.

When we collectively “call upon” Iran to cease its ballistic missile activity, we must agree to stop it now. But Iran is as defiant of the world’s insistence as ever. Because here we are, for the 12th year in a row, meeting about Iran’s ballistic missiles, addressing an incredibly problematic data set.

Iran’s pace of missile activity, including missile launches and tests, did not diminish since the JCPOA. In fact, Iran’s missile testing and missile proliferation is growing. Today Iran has the largest ballistic missile force in the Middle East. It has more than 10 ballistic missile systems in its inventory or in development. It has hundreds of missiles which pose a threat to our partners in the region.

From more recent times: In 2016, during the time of the JCPOA, Iran unveiled two new short-range ballistic missiles, which it claims are capable of striking targets between 500 and 700 kilometers. In January of 2017, during the time of the JCPOA, Iran launched a medium-range missile designed to carry a payload greater than 500 kilograms, and which could be used to carry nuclear warheads. Its suspected range also approaches 2,000 kilometers, which is far enough to target Athens, Sofia, Bucharest, and other major European cities. If the IRGC airspace commander is telling the truth, and Iran has capabilities beyond 2,000 kilometers, other European capitals are at risk as well.

Iran has exported ballistic missile systems as well, most recently to Yemen. We have hard evidence that Iran is providing missiles, training, and support to the Houthis, and the Iranian-Houthi missile force is fully engaged. This poses a threat to innocent civilians – including Americans – living in Riyadh, Abu Dhabi, Dubai, as well as people of all nationalities who travel on civilian aircraft in that region.

And just look at the last two weeks. The Iranian regime test-fired a medium range ballistic missile that is capable of carrying multiple warheads.

Our goodwill gestures have been futile, futile in correcting the Iranian regime’s reckless missile activity and its destructive behaviors. No nation can dispute that Iran is in open defiance of UN Security Council Resolution 2231.

The United States is not alone in raising these concerns. I’d like to thank France and Germany and the United Kingdom for raising concerns about Iranian missile proliferation to the secretariat.

I would also like to thank our partners from Saudi Arabia and the United Arab Emirates, who are working with UN inspectors in recovering material debris of Iranian-supplied missiles, rockets, and UAVs launched into their countries by Houthi forces in Yemen.

Our Israeli allies have brought further evidence to the Security Council about Iran’s continued launches of ballistic missiles that are inherently capable of carrying nuclear weapons. Israel has also given evidence to the secretariat of Iran’s transfer of weapon systems to its proxies all around the Middle East, and in defiance of what we have insisted that they do.

So the question – the question now: What steps ought we take to confront this Iranian malign activity? We risk the security of our people if Iran continues stocking up on ballistic missiles. We risk escalation of conflict in the region if we fail to restore deterrence. And we convey to all other malign actors that they too can defy the Security Council with impunity if we do nothing.

The United Nations Charter, as you all know well, calls the primary – gives – bestows upon the Security Council “the primary responsibility for the maintenance of international peace and security.” We all take this responsibility seriously. The United States seeks to work with all other members of the Council to reimpose on Iran the ballistic missiles restrictions outlined in 1929.

Beyond addressing Iran’s ballistic missile activities, the Council should not lift the arms embargo in 2020 on Iran. This is a country in noncompliance with multiple UN Security Council resolutions, including those related to al-Qaida, Afghanistan, Lebanon, Yemen, and Somalia. Iran is harboring al-Qaida, supporting Taliban militants in Afghanistan, arming terrorists in Lebanon, facilitating illicit trade in Somali charcoal benefiting al-Shabaab, and training and equipping Shia militias in Iraq, even as we sit here today.

It is also stoking conflict in Syria and Yemen. The Council must address these malign activities. It cannot reward Iran by lifting the arms embargo.

We also call on the Council to establish inspection and interdiction measures, in ports and on the high seas, to thwart Iran’s continuing efforts to circumvent the existing arms restrictions.

Some have questioned our decision to withdraw from the JCPOA. We reply that it is self-evident why we did so based upon the very conversation we’re having here today. Prior to the deal, Western leaders made grand claims of how the JCPOA would usher in a new era of moderation from the Iranian regime.

Indeed, America’s own president said, quote, “Ideally, we would see a situation in which Iran, seeing sanctions reduced, would start focusing on its economy, on training its people, on re-entering the world community, to lessening its provocative activities in the region.” But what do we actually see?

The JCPOA has without a doubt, to date, shielded the Islamic Republic of Iran from the accountability to the risks it presents to the world.

The Iranian regime is pursuing the same destructive, revolutionary goals that it has for the past 39 years – except now it has more money to achieve them, thanks to the nuclear deal.

I’m here today first and foremost as my capacity as the Secretary of State of the United States of America. Under President Trump, the security of our people and our allies comes first.

But in the finest traditions of American leadership, the United States will continue to unite sovereign nations in their responsibility to work for the peace and security of their own people and a stable international order.

The United States is going to continue to be relentless in building a coalition of responsible nations who are serious in confronting the Iranian regime’s reckless ballistic missile activity.

This includes the treatment of its own people as well. That type of malign activity is something that the United States will keep standing side by side with the people of Iran. They have been the worst victims of the regime for nearly 40 years and they have the unwavering support of the United States.

Finally, The Trump administration clearly defined in May the 12 areas in which we are demanding change from Iran.

If Iran makes a fundamental strategic shift and honors these demands, we are prepared to ease our pressure campaign and support the modernization and reintegration of the Iranian economy into the international economic system.

But relief – relief from our efforts will come only when we see tangible, demonstrated, and sustained shifts in Tehran’s policies.