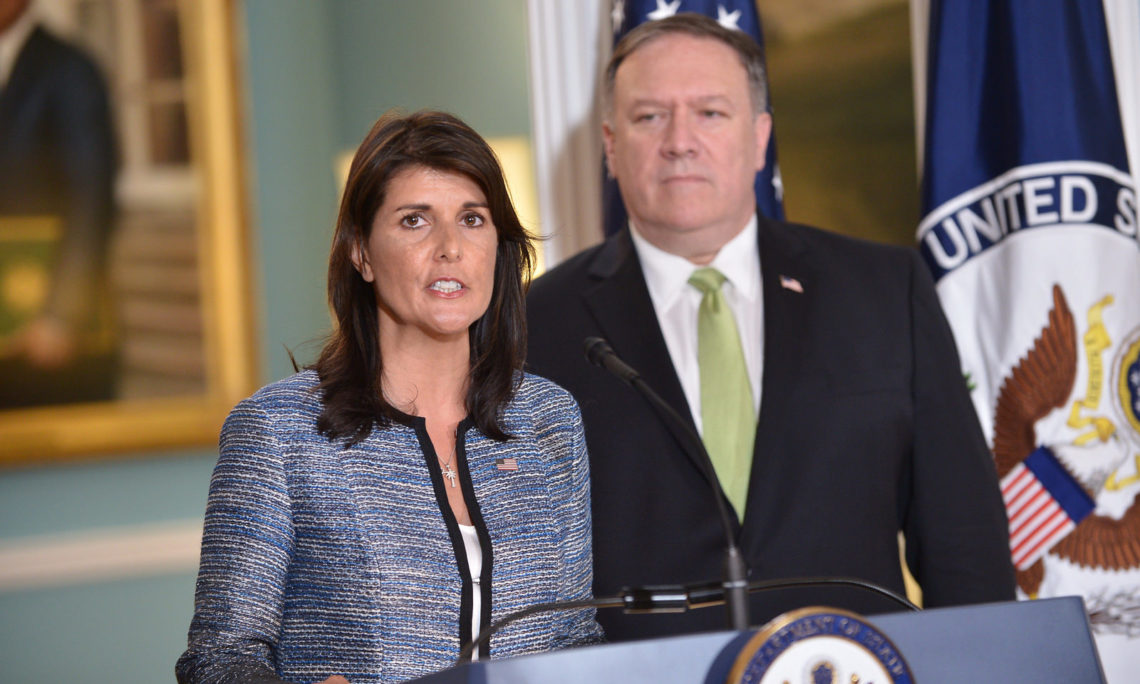 June 19, 2018
SECRETARY POMPEO: Good afternoon. The Trump administration is committed to protecting and promoting the God-given dignity and freedom of every human being. Every individual has rights that are inherent and inviolable. They are given by God, and not by government. Because of that, no government must take them away.For decades, the United States has led global efforts to promote human rights, often through multilateral institutions. While we have seen improvements in certain human rights situations, for far too long we have waited while that progress comes too slowly or in some cases never comes. Too many commitments have gone unfulfilled.

President Trump wants to move the ball forward. From day one, he has called out institutions or countries who say one thing and do another. And that’s precisely the problem at the Human Rights Council. As President Trump said at the UN General Assembly: “It is a massive source of embarrassment to the United Nations that some governments with egregious human rights records sit on the Human Rights Council.”

We have no doubt that there was once a noble vision for this council. But today, we need to be honest – the Human Rights Council is a poor defender of human rights.

Worse than that, the Human Rights Council has become an exercise in shameless hypocrisy – with many of the world’s worst human rights abuses going ignored, and some of the world’s most serious offenders sitting on the council itself.

The only thing worse than a council that does almost nothing to protect human rights is a council that covers for human rights abuses and is therefore an obstacle to progress and an impediment to change. The Human Rights Council enables abuses by absolving wrongdoers through silence and falsely condemning those who have committed no offense. A mere look around the world today demonstrates that the council has failed in its stated objectives.

Its membership includes authoritarian governments with unambiguous and abhorrent human rights records, such as China, Cuba, and Venezuela.

There is no fair or competitive election process, and countries have colluded with one another to undermine the current method of selecting members.

And the council’s continued and well-documented bias against Israel is unconscionable. Since its creation, the council has adopted more resolutions condemning Israel than against the rest of the world combined.

The United States has no opposition in principle to multilateral bodies working to protect human rights. We desire to work with our allies and partners on this critical objective that reflects America’s commitment to freedom.

The United States – which leads the world in humanitarian assistance, and whose service members have sacrificed life and limb to free millions from oppression and tyranny – will not take lectures form hypocritical bodies and institution as Americans selflessly give their blood and treasure to help the defenseless.

Ambassador Haley has spent more than a year trying to reform the Human Rights Council.

She has asserted American leadership on everything from the Assad regime’s chemical weapons use, to the pressure campaign against North Korea, and the Iran-backed provocations in the Middle East.

Ambassador Haley has been fearless and a consistent voice on behalf of our ally Israel. And she has a sincere passion to protect the security, dignity, and the freedom of human beings around the world – all while putting American interests first. She has been a fierce defender of human rights around the world.

I will now turn it over to Ambassador Haley for her announcement on how the United States will move forward with respect to the UN Human Rights Council.

AMBASSADOR HALEY: Thank you. Good afternoon. I want to thank Secretary Pompeo for his friendship and his partnership and his leadership as we move forward on these issues.

Regrettably, it is now clear that our call for reform was not heeded. Human rights abusers continue to serve on and be elected to the council. The world’s most inhumane regimes continue to escape scrutiny, and the council continues politicizing and scapegoating of countries with positive human rights records in an attempt to distract from the abusers in their ranks.

Therefore, as we said we would do a year ago if we did not see any progress, the United States is officially withdrawing from the UN Human Rights Council. In doing so, I want to make it crystal clear that this step is not a retreat from human rights commitments; on the contrary, we take this step because our commitment does not allow us to remain a part of a hypocritical and self-serving organization that makes a mockery of human rights.

We did not make this decision lightly. When this administration began 17 months ago, we were well aware of the enormous flaws in the Human Rights Council. We could have withdrawn immediately. We did not do that.

Instead, we made a good-faith effort to resolve the problems. We met with ambassadors of over a dozen countries in Geneva. Last September, in President Trump’s speech before the UN General Assembly, he called for member-states to support Human Rights Council reform. During High-Level Week last year, we led a session on Human Rights Council reform cohosted by the British and Dutch foreign ministers and more than 40 other countries.

Our efforts continued all through this year in New York, where my team met with more than 125 member-states and circulated draft texts. Almost every country we met with agrees with us in principle and behind closed doors that the Human Rights Council needs major, dramatic, systemic changes, yet no other country has had the courage to join our fight.

Meanwhile, the situation on the council has gotten worse, not better. One of our central goals was to prevent the world’s worst human rights abusers from gaining Human Rights Council membership. What happened? In the past year, the Democratic Republic of Congo was elected as a member. The DRC is widely known to have one of the worst human rights records in the world. Even as it was being elected to membership in the Human Rights Council, mass graves continued to be discovered in the Congo.

Another of our goals was to stop the council from protecting the world’s worst human rights abusers. What happened? The council would not even have a meeting on the human rights conditions in Venezuela. Why? Because Venezuela is a member of the Human Rights Council, as is Cuba, as is China.

Similarly, the council failed to respond in December and January when the Iranian regime killed and arrested hundreds of citizens simply for expressing their views.

When a so-called Human Rights Council cannot bring itself to address the massive abuses in Venezuela and Iran, and it welcomes the Democratic Republic of Congo as a new member, the council ceases to be worthy of its name. Such a council, in fact, damages the cause of human rights.

And then, of course, there is the matter of the chronic bias against Israel. Last year, the United States made it clear that we would not accept the continued existence of agenda item seven, which singles out Israel in a way that no other country is singled out. Earlier this year, as it has in previous years, the Human Rights Council passed five resolutions against Israel – more than the number passed against North Korea, Iran, and Syria combined. This disproportionate focus and unending hostility towards Israel is clear proof that the council is motivated by political bias, not by human rights.

For all these reasons, the United States spent the past year engaged in a sincere effort to reform the Human Rights Council. It is worth examining why our efforts didn’t succeed. At its core, there are two reasons. First, there are many unfree countries that simply do not want the council to be effective. A credible human rights council poses a real threat to them, so they opposed the steps that would create it.

Look at the council membership and you see an appalling disrespect for the most basic human rights. These countries strongly resist any effort to expose their abusive practices. In fact, that’s why many of them run for a seat on the Human Rights Council in the first place: to protect themselves from scrutiny. When we made it clear we would strongly pursue council reform, these countries came out of the woodwork to oppose it. Russia, China, Cuba, and Egypt all attempted to undermine our reform efforts this past year.

The second reason our reforms didn’t succeed is in some ways even more frustrating. There are several countries on the Human Rights Council who do share our values. Many of them strongly urged us to remain engaged in the council. They are embarrassed by the obsessive mistreatment of Israel. They share our alarm with the hypocrisy of countries like Cuba, Venezuela, Democratic Republic of Congo, and others serving on the council.

Ultimately, however, many of these likeminded countries were unwilling to seriously challenge the status quo. We gave them opportunity after opportunity and many months of consultations, and yet they would not take a stand unless it was behind closed doors. Some even admittedly were fine with the blatant flaws of the council as long as they could pursue their own narrow agenda within the current structure.

I have traveled to the – to UN refugee and internally displaced persons camps in Ethiopia, Congo, Turkey, and Jordan, and met with the victims of atrocities in those troubled regions. We have used America’s voice and vote to defend human rights at the UN every day, and we will continue to do so. Even as we end our membership in the Human Rights Council, we will keep trying to strengthen the entire framework of the UN engagement on human rights issues, and we will continue to strongly advocate for reform of the Human Rights Council. Should it become reformed, we would be happy to rejoin it.

America has a proud legacy as a champion of human rights, a proud legacy as the world’s largest provider of humanitarian aid, and a proud legacy of liberating oppressed people and defeating tyranny throughout the world. While we do not seek to impose the American system on anyone else, we do support the rights of all people to have freedoms bestowed on them by their creator. That is why we are withdrawing from the UN Human Rights Council, an organization that is not worthy of its name.