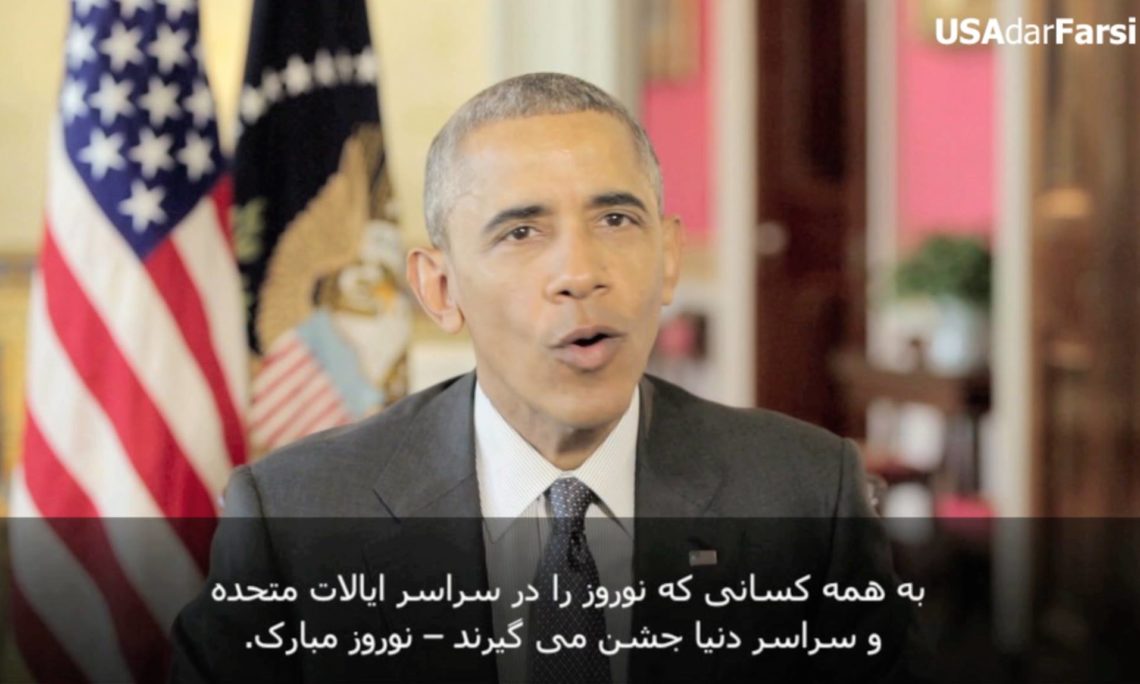 Hello! To everyone celebrating Nowruz-across the United States and around the world-Nowruz Mobarak.

The great poet Fereydoon Moshiri once wrote – “Open the windows. For the kind breeze is celebrating the birthday of the flowers. And spring, on each and every branch next to each leaf, has lit candles.”

Every year as President, I’ve taken this opportunity-the hope of spring-to speak directly to the people of Iran about how we might open a new window-and begin a new relationship-between our countries. Now, for the first time in decades, there’s a chance for a different future.

Over the years, you’ve heard me say that the United States was prepared to engage with Iran in a spirit of mutual interest and mutual respect. Well, that’s exactly what we did. In the last few years, our diplomats and nuclear scientists sat down together and negotiated-face to face. And last summer, along with our international partners, we reached the historic deal on Iran’s nuclear program.

Two months ago, Iran fulfilled key commitments under that deal. Iran has now rolled back key parts of its nuclear program-and agreed to verification measures-to assure the world that its nuclear program is, and will remain, for peaceful purposes. In return, the international community lifted certain sanctions on Iran, and Iran gained access to money that had been frozen overseas. At the same time, we recognize Iran’s right to peaceful nuclear energy, consistent with Iran’s nuclear obligations. It may take time for you, the Iranian people, to feel the full benefits of the lifting of these sanctions in your daily lives. But the benefits are undeniable.

Iran now has the opportunity to begin reintegrating itself with the global economy. That means more trade and investment, which will mean more jobs, including for young Iranians who dream of pursuing their careers and making their mark on the world. It will mean more access to cutting-edge technologies, including information technologies that can help Iranian start-ups. It will mean more opportunities for Iranians to sell your exports-including textiles and agricultural goods-to the world. And I know that Americans are eager to buy more of your beautiful Persian carpets, caviar, pistachios and saffron. More tourists will visit historic sites like Shiraz, Tabriz and Esfahan and spend their money in your shops and restaurants. Iranians, including students, will have more opportunities to travel and study abroad.

The nuclear deal was never intended to resolve all the disputes between our two nations. And the United States continues to have profound differences with the Iranian government. But even as our two governments continue to have serious disagreements, the fact that we are now talking to each other on a regular basis, for the first time in decades, gives us an opportunity-a window-to resolve other issues. As we do, I firmly believe that we can continue to expand the connections between the American and Iranian people.

This week, I’m making an historic visit to Cuba. For decades, our two governments were locked in conflict. Not long ago, my visit to Havana would have been unthinkable. This week, I’ll focus on how we can build more trade and ties between our two peoples. My visit will be a reminder that, even after decades of mistrust, it is possible for old adversaries to start down a new path.

“Open the windows. For the kind breeze is celebrating the birthday of the flowers. And spring, on each and every branch next to each leaf, has lit candles.” As you and your families welcome the new spring this Nowruz, I wish you a happy, healthy and prosperous new year. And I hope that the friendship and ties between the American and Iranian people will continue to grow.

Thank you, and Nowruzetan Pirooz.