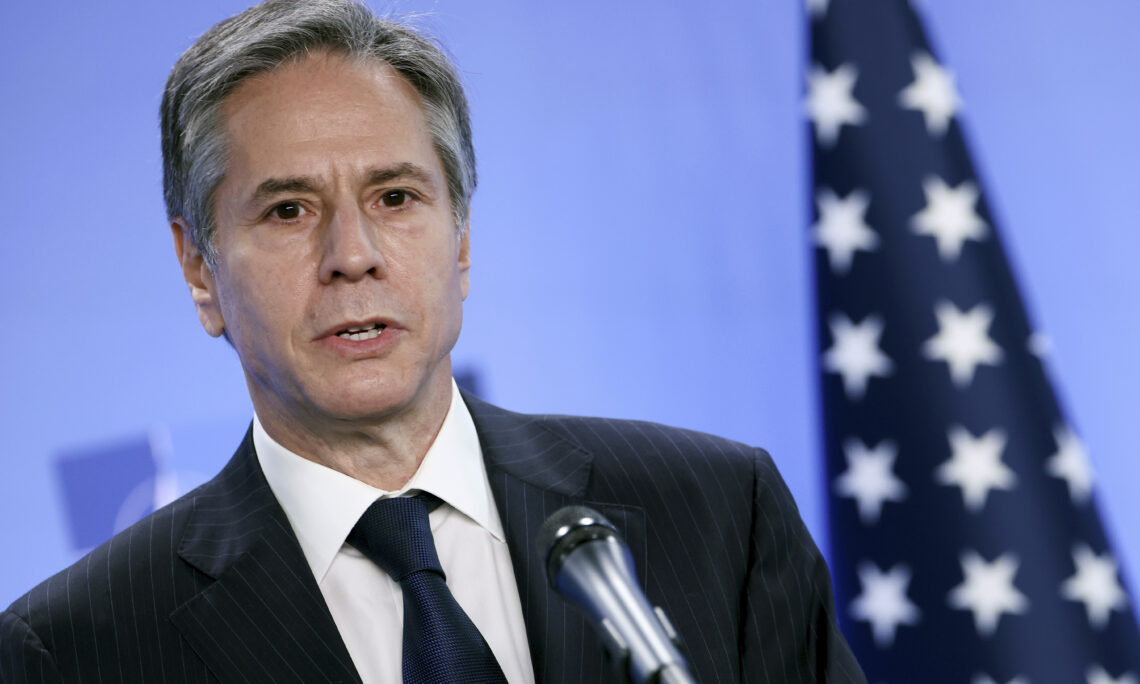 SECRETARY BLINKEN:  Well, good morning, good afternoon, good evening.  Let me start by thanking China and Foreign Minister Wang for initiating this critical discussion on the future of the United Nations and the international order.  And thank you as well to the President of the General Assembly Bozkir for your leadership.

When countries came together after World War II to form the United Nations, virtually all of human history up till then indicated that might made right.  Competition inevitably led to collision.  The rise of a nation or group of nations necessitated the fall of others.

Then our nations united in choosing a different path.  We adopted a set of principles to prevent conflict and alleviate human suffering; to recognize and defend human rights; to foster an ongoing dialogue to uphold and improve a system aimed at benefiting all people.

The most powerful countries bound themselves to these principles.  They agreed to a form of self-restraint – as President Truman put it, to deny themselves the license to do always as they pleased – because they recognized that this would ultimately serve not only humanity’s interests, but their own.  The United States did this, even though it was by far the most powerful nation on Earth at the time.  It was enlightened self-interest.  We believed other nations’ success was critical to ours.  And we didn’t want less powerful countries feeling threatened and obliged to band together against us.

In the years since, we’ve faced daunting challenges, from the divisions of the Cold War, the vestiges of colonialism, and the times the world stood by in the face of mass atrocities.  And today, conflicts, injustice, and suffering around the globe underscore how many of our aspirations remain unfulfilled.

But no period in modern history has been more peaceful or prosperous than the one since the United Nations was created.  We avoided armed conflict between nuclear powers.  We helped millions of people emerge from poverty.  We advanced human rights as never before.

This bold endeavor, whatever its imperfections, has been an unprecedented achievement.  And it’s endured because the overwhelming majority of people and nations continue to see it as representing their interests, their values, their hopes.

But now it’s in serious jeopardy.

Nationalism is resurgent, repression is rising, rivalries among countries are deepening – and attacks against the rules-based order are intensifying.  Now, some question whether multilateral cooperation is still possible.

The United States believes it is not only possible, it is imperative.

Multilateralism is still our best tool for tackling big global challenges – like the one that’s forcing us to gather on a screen today rather than around a table.  The COVID-19 pandemic has changed life as we know it across the planet, with millions of deaths and devastating impacts on economies, health, education, social progress.

The climate crisis is another massive threat.  If we don’t move swiftly to cut emissions, the results will be catastrophic.

We built the multilateral system in part to solve big, complex problems like these, where the fates of people around the world are tied together and where no single country – no matter how powerful – can address the challenges alone.

That’s why the United States will work through multilateral institutions to stop COVID-19 and tackle the climate crisis, and we will abide by the core principles of the international order as we do.

We’ll also work with any country on these issues – including those with whom we have serious differences.  The stakes are too high to let differences stand in the way of our cooperation.  The same holds true for stemming the spread and use of nuclear weapons, delivering life-saving humanitarian assistance, managing deadly conflicts.

At the same time, we will continue to push back forcefully when we see countries undermine the international order, pretend that the rules we’ve all agreed to don’t exist, or simply violate them at will.  Because for the system to deliver, all countries must abide by it and put in the work for its success.

There are three ways we can do that.

First, all members should meet their commitments – particularly the legally binding ones.  That includes the UN Charter, treaties and conventions, UN Security Council resolutions, international humanitarian law, and the rules and standards agreed to under the auspices of the World Trade Organization and numerous international standard-setting organizations.

Let me be clear – the United States is not seeking to uphold this rules-based order to keep other nations down.  The international order we helped build and defend has enabled the rise of some of our fiercest competitors.  Our aim is simply to defend, uphold, and revitalize that order.

Second, human rights and dignity must stay at the core of the international order.  The foundational unit of the United Nations – from the first sentence of the Charter – is not just the nation state.  It’s also the human being.  Some argue that what governments do within their own borders is their own business, and that human rights are subjective values that vary from one society to another.  But the Universal Declaration of Human Rights begins with the word “universal” because our nations agreed there are certain rights to which every person, everywhere, is entitled.  Asserting domestic jurisdiction doesn’t give any state a blank check to enslave, torture, disappear, ethnically cleanse their people, or violate their human rights in any other way.

And this leads me to my third point, which is that the United Nations is based on the principle of the sovereign equality of its member-states.

A state does not respect that principle when it purports to redraw the borders of another; or seeks to resolve territorial disputes by using or threatening force; or when a state claims it’s entitled to a sphere of influence to dictate or coerce the choices and decisions of another country.  And a state shows contempt for that principle when it targets another with disinformation or weaponized corruption, undermines other countries’ free and fair elections and democratic institutions, or goes after journalists or dissidents abroad.

These hostile actions can also threaten the international peace and security that the United Nations Charter obliges this body to maintain.

When UN member-states – particularly permanent members of the Security Council – flout these rules and block attempts to hold accountable those who violate international law, it sends the message that others can break those rules with impunity.

All of us must accept the scrutiny, however difficult, that comes with the commitments we have freely made.  That includes the United States.

I know that some of our actions in recent years have undermined the rules-based order and led others to question whether we are still committed to it.  Rather than take our word for it, we ask the world to judge our commitment by our actions.

Under the Biden-Harris administration, the United States has already re-engaged vigorously in multilateral institutions.  We have rejoined the Paris climate accord, recommitted to the World Health Organization, and we’re seeking to rejoin the Human Rights Council.  We’re engaged in diplomacy to return to mutual compliance with the Joint Comprehensive Plan of Action and to strengthen the nuclear nonproliferation regime.  We are by far the largest contributor to COVAX, the best vehicle for the equitable distribution of COVID-19 vaccines, and we’re making tens of millions of doses available to others without political considerations.

We’re also taking steps, with great humility, to address the inequities and injustices in our own democracy.  We do so openly and transparently for people around the world to see, even when it’s ugly, even when it’s painful.  And we will emerge stronger and better for doing so.

Likewise, it’s not enough simply to defend the rules-based order we have now.  We should improve and build upon it.  We need to take into account the change in power dynamics over the past eight decades, not only between countries but within them.  We need to address legitimate grievances – particularly unfair trading practices – that have provoked a backlash against an open international economic order in many countries, including in the United States.  And we must ensure that this order is equipped to address new problems – like national security and human rights concerns raised by new technologies, from cyber attacks to surveillance to discriminatory algorithms.

Finally, we need to modernize the way we build coalitions and who we include in our diplomacy and development efforts.  That means forging non-traditional partnerships across regional lines, bringing together cities, the private sector, foundations, civil society, and social and youth movements.

And we must improve equity within and between our countries and close economic, political, and social gaps that persist based on race, gender, and other parts of our identity that make us who we are.

At the founding of this institution, President Truman said, “This Charter was not the work of any single nation or group of nations, large or small.  It was the result of a spirit of give-and-take, of tolerance for the views and interests of others.”  He said it was proof that nations can state their differences, face them, and find common ground on which to stand.

We continue to have profound differences – among the UN member-states and within this Council.  But the United States will spare no effort to find and stand on that common ground with any country that upholds its commitments to the order we founded together, and which we must defend and revitalize together.

That’s the great test of this moment.  Let’s meet it together.