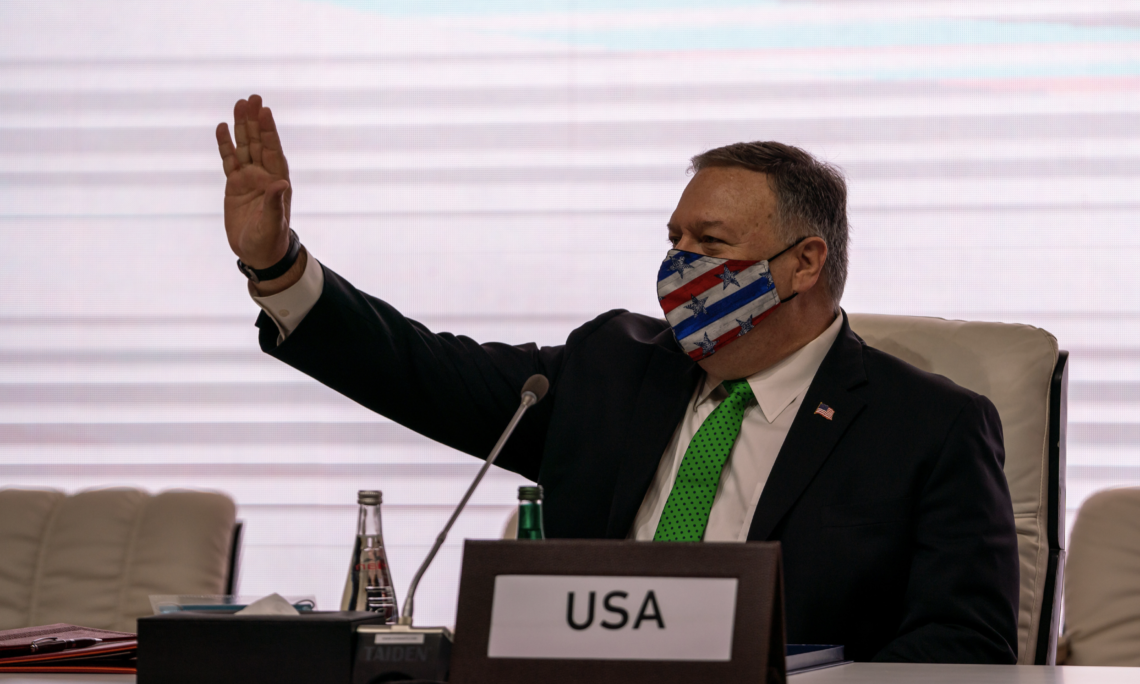 “No policy,” said Charles de Gaulle, “is worth anything outside of reality. That maxim guides the United States’ policy regarding the Islamic Republic of Iran. We recognize the regime for what it is: the world’s leading state sponsor of terrorism, and the primary source of instability in the Middle East. I believe our friends in France perceive Tehran’s true nature, too. The question is whether France is willing to join us to stand up to Iran and secure peace and regional stability. The brutality of the current regime is borne first by the Iranian people themselves. Just last year, security forces killed up to 1,500 peaceful protestors across Iran who took to the streets after a fuel price increase. Harassment, discrimination, and unjust imprisonment are common for members of minority religious communities, women who refuse to wear the hijab, homosexuals, and those who speak out against the regime. My fellow Americans are also among Tehran’s victims. Iran-backed Hizballah killed hundreds of Americans (and many French citizens) in attacks in Lebanon in the 1980s, including in the 1983 Beirut Marine barracks bombings. Nineteen more Americans died when Hizballah bombed the Khobar Towers in Saudi Arabia in 1996. And more than 600 American servicemembers were killed by Iranian-backed militants in the course of the second Iraq war. Today Tehran is holding three Americans hostage.

Yet Iran’s spillage of American blood is only part of a larger history of Iranian malign activity in the Middle East. In 2015, free nations hoped the Joint Comprehensive Plan of Action (JCPOA) would end the regime’s malign behavior – and especially its illicit nuclear activities. They hoped that bolstering Iran economically would tamp down the regime’s lawless violence.Far from joining the community of nations, Iran reacted to the West’s appeasement with more bloodshed and defiance. It was Iranian missiles that struck Saudi oil facilities, and Iranian mines that detonated on commercial vessels in the Persian Gulf last year. In Yemen, Iran-backed Houthi rebels are fueling one of the world’s worst humanitarian crises. Iran-backed Shia militias like Kata’ib Hizballah choke Iraqi sovereignty and democracy. The sands of Syria are gorged with the blood of innocents thanks to Iranian forces, the Iran-backed Assad regime, and Hizballah. And no country has groaned under the thumb of Iran quite like Lebanon. Iran’s proxy Hizballah has been the predominant political actor in that country for roughly three decades, and today in Beirut, corruption abounds, a broken financial and political system barely functions, and young Lebanese chant “Iran, get out!” in the streets.

Unfortunately, France refuses to designate all of Hizballah a terrorist organization, as other European nations have done, and has restrained EU progress on that same action. Instead, Paris maintains the fiction that there is a “political wing” of Hizballah, when all of it is controlled by a single terrorist, Hassan Nasrallah. I share the frustration of the 27 French public figures who recently called for France to make this designation in a joint letter to this publication. Here are the facts: With the JCPOA in place, Iran’s military budget skyrocketed, and Iranian-backed militias and terrorists had more money to kill and entrench themselves across the Middle East. Iran has built up the largest ballistic missile force in the Middle East, and it has violated multiple nuclear-related provisions of the agreement. The skepticism that many French leaders had of the deal during negotiations now looks more justified than ever. President Trump understands that only maximum pressure on the regime, not appeasement, can induce the changes in behavior we all seek. That’s why the U.S. has levied unprecedented economic sanctions on the regime, and restored military deterrence against it, most prominently by removing Qasem Soleimani from the battlefield.

Our campaign also means making sure Iran cannot buy or sell conventional weapons – main battle tanks, combat jets, missiles, and so on. That’s what the UN Security Council did by applying arms transfer restrictions on Iran for the last 13 years. But the authors of the JCPOA made a terrible mistake in putting an expiration date on them: October 18th of this year. The effects of a lifted embargo are clear: The world’s foremost state sponsor of terror will supply arms to terrorists and tyrants. Mideast shipping and energy infrastructure – so critical to European and other international economies – will be under even greater threat. And the region’s people will be exposed to yet more suffering at the hands of the Ayatollahs. Rarely have such dangerous developments been so preventable. But on August 14, France, along with the UK and Germany, failed to support the United States’ resolution to renew the arms embargo introduced at the Security Council.

Extending the embargo would have served the Security Council’s mission of “the maintenance of international peace and security,” transatlantic cooperation, and multilateralism more broadly. So why didn’t our European friends support the reasonable proposal that was offered, or at least offer an alternative? Why did they affirm the dangers of the embargo expiring to me in private, but take no action publicly? On the policy front, the problem is fear. Our European allies fear that if they hold Iran accountable for its destabilizing behavior, Iran will violate the deal even more in response. This strategy of appeasement does nothing but play into Iran’s grand strategy. It’s a successful campaign of diplomatic extortion, crafted by my predecessor, Secretary Kerry.

Political calculations also play into Europe’s stance, where several leaders refuse to take action until after the upcoming U.S. presidential election. This cynical gambit regards Iran’s maiming and murdering as acceptable collateral damage, and lamentably sees Washington as more dangerous to the world than Tehran. I wonder if the residents of Beirut, or Riyadh, or Jerusalem – the cities most at risk from Iran – would agree? How could France vote down the arms embargo one week, and President Macron meet with a senior Hizballah official in Beirut the next? On August 20, I invoked the United States’ authority to restore virtually all UN sanctions on Iran that were suspended under UN Security Council 2231. Restoring these sanctions was never the United States’ preferred path, but they will soon be here to stay. All countries are bound to enforce them; to do otherwise grossly undermines the Council’s authority and credibility, and could normalize selective enforcement of Security Council resolutions. What legitimate claims to being defenders of multilateralism will countries have then?