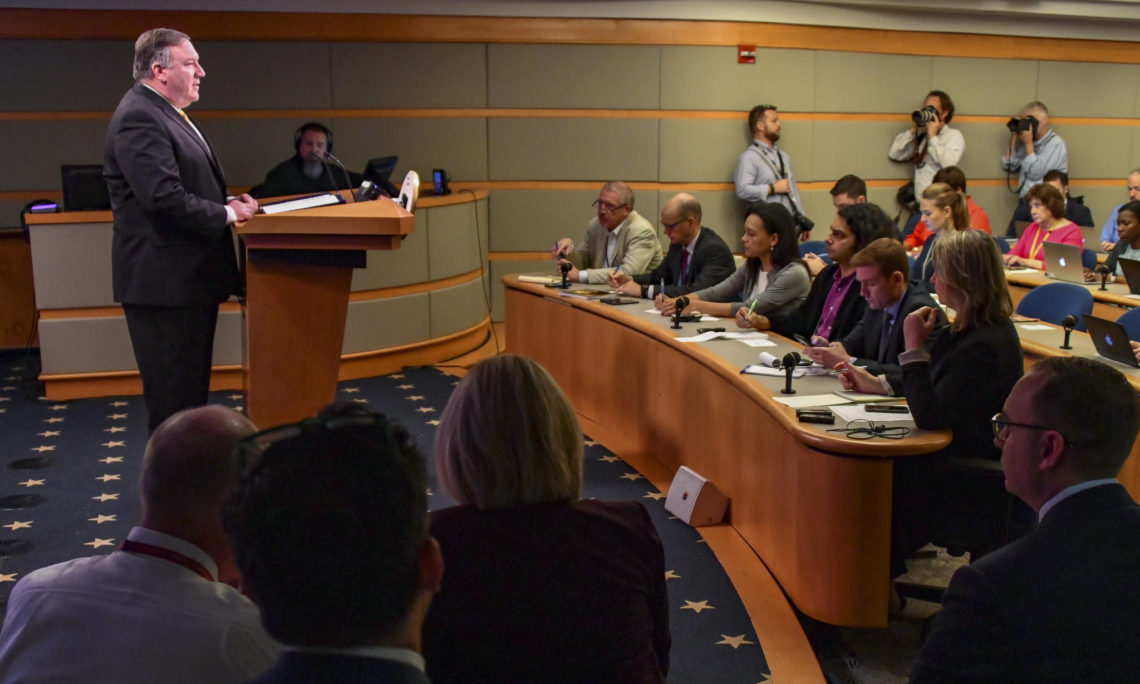 To the situation in Iraq, Iran is the origin of the current threat to Americans in Iraq. It is to blame for the attacks against our mission in Basra and our embassy in Baghdad. Our intelligence in this regard is solid. We can see the hand of the ayatollah and his henchmen supporting these attacks on the United States.

On Friday, I ordered the temporary relocation of U.S. Government personnel from our consulate general in Basra. I also warned the Iranian Government that we will hold it directly responsible for any harm to Americans or our diplomatic facilities, whether perpetrated by Iranian forces or by associated proxies or elements of those militias.

These latest destabilizing acts in Iraq are attempts by the Iranian regime to push back on our efforts to constrain its malign behavior. Clearly, they see our comprehensive pressure campaign as serious and succeeding, and we must be prepared for them to continue their attempts to hit back, especially after our full sanctions are re-imposed on the 4th of November.

The United States will continue to stand with the people of Iraq as they chart a future based on Iraqi interest, not those dictated by Iran. Even with the temporary relocation of our staff, we are supporting the delivery of clean water to the 750,000 residents in Basra

Now let me turn to the ICJ ruling from today. I’m announcing that the United States is terminating the 1955 Treaty of Amity with Iran. This is a decision, frankly, that is 39 years overdue. In July, Iran brought a meritless case in the International Court of Justice alleging violations of the Treaty of Amity. Iran seeks to challenge the United States decision to cease participation in the Iran nuclear deal and to re-impose the sanctions that were lifted as a part of that deal. Iran is attempting to interfere with the sovereign rights of the United States to take lawful actions necessary to protect our national security. And Iran is abusing the ICJ for political and propaganda purposes and their case, as you can see from the decision, lacked merit.

Given Iran’s history of terrorism, ballistic missile activity, and other malign behaviors, Iran’s claims under the treaty are absurd. The court’s ruling today was a defeat for Iran. It rightly rejected all of Iran’s baseless requests. The court denied Iran’s attempt to secure broad measures to interfere with U.S. sanctions and rightly noted Iran’s history of noncompliance with its international obligations under the Treaty on the Nonproliferation of Nuclear Weapons.

With regard to the aspects of the court’s order focusing on potential humanitarian issues, we have been clear: Existing exceptions, authorizations, and licensing policies for humanitarian-related transactions and safety of flight will remain in effect. The United States has been actively engaged on these issues without regard to any proceeding before the ICJ. We’re working closely with the Department of the Treasury to ensure that certain humanitarian-related transactions involving Iran can and will continue.

That said, we’re disappointed that the court failed to recognize it has no jurisdiction to issue any order relating to these sanctions measures with the United States, which is doing its work on Iran to protect its own essential security interests.

In light of how Iran has hypocritically and groundlessly abused the ICJ as a forum for attacking the United States, I am therefore announcing today that the United States is terminating the Treaty of Amity with Iran. I hope that Iran’s leaders will come to recognize that the only way to secure a bright future for its country is by ceasing their campaign of terror and destruction around the world.