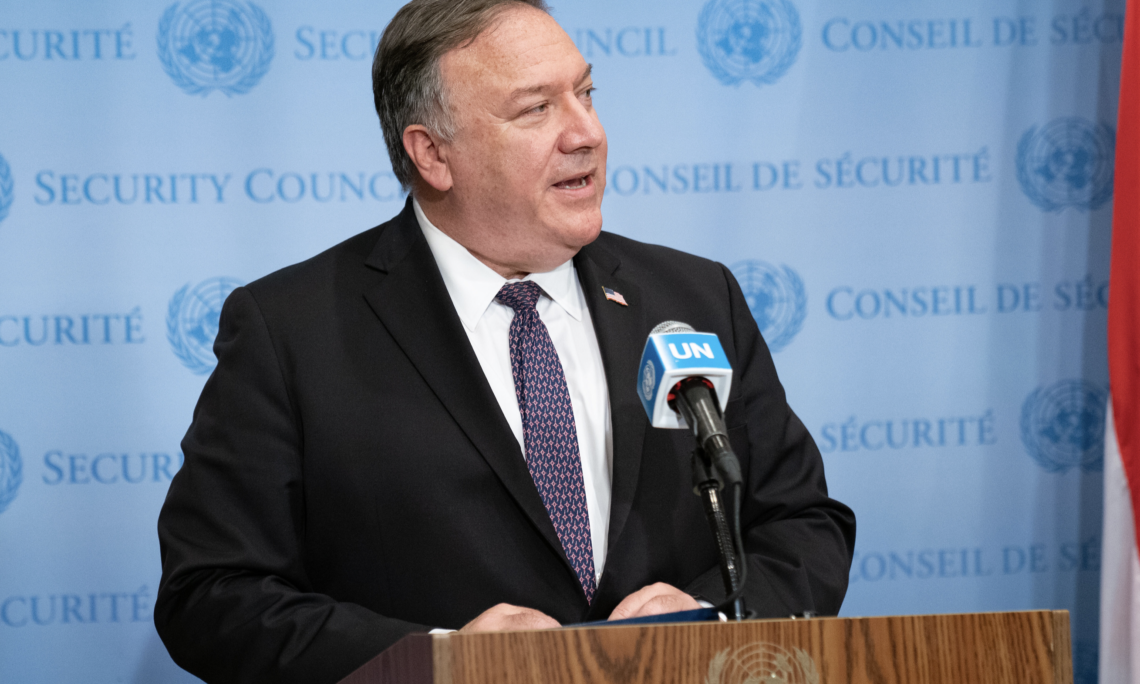 Good afternoon, everyone. Just a few minutes ago, I delivered letters to both the UN Secretary-General Guterres and to the president of the Security Council.

I notified them that the United States is initiating the restoration of virtually all UN sanctions on Iran lifted under UN Security Council Resolution 2231. This process will lead to those sanctions coming back into effect 30 days from today.

Our message is very, very simple: the United States will never allow the world’s largest state sponsor of terrorism to freely buy and sell planes, tanks, missiles, and other kinds of conventional weapons. These UN sanctions will continue the arms embargo.

I’m pleased to say, too, that these restored sanctions will also reimpose accountability for other forms of Iranian malign activity that the authors of the nuclear deal foolishly downplayed. Iran will be again prohibited from ballistic missile testing. Iran will be back under sanctions for ongoing nuclear activities – such as the enrichment of nuclear material – that could be applied to a nuclear weapons program.

This is happening, of course, at a moment when Iran is refusing to allow the IAEA to inspect sites suspected of undeclared nuclear activity, that were formerly part of Iran’s nuclear weapons program.

President Trump and this administration have discarded the fiction that the regime merely seeks a peaceful nuclear program. We will never allow the Islamic Republic of Iran to have a nuclear weapon.

Our actions today too should come as no surprise to anyone. Our team has made every diplomatic effort over now almost two years to renew this arms embargo. I want to thank the Dominican Republic for standing with us in this effort.

Our friends in Germany, France, and the United Kingdom – the E3 – all told me privately that they don’t want the arms embargo lifted either.

And yet today, in the end, they provided no alternatives, no options. No country but the United States had the courage and conviction to put forward a resolution. Instead, they chose to side with ayatollahs. Their actions endanger the people of Iraq, of Yemen, of Lebanon, of Syria – and indeed, their own citizens as well.

In stark contrast, the Gulf Cooperation Council nations deserve praise for showing courage and unity in warning about the danger from Iran.

Two weeks ago, Bahrain, Kuwait, Oman, Qatar, Saudi Arabia, and the United Arab Emirates sent a letter to the Security Council urging a renewal of the arms embargo before it expired in October.

As Iran’s neighbors, they know better than anyone else the havoc that Iran could create with these weapons. Look, the world – and especially our European friends on the Security Council – should have heeded their words.

The leadership begins with recognizing the Islamic Republic of Iran for what it truly is: a theocratic, revolutionary, brutish regime that will not voluntarily seek peace or make life better for the Iranian people.

The one-sided, foolish nuclear deal didn’t bring security for America, it didn’t bring stability to the Middle East, nor did it moderate the regime’s behavior – and it never can. It never will.

sToday’s actions puts additional pressure Iran to behave like a normal country, and to come back to the bargaining table.

We call on the international community to join us in crafting a stronger deal that addresses the full range of Iran’s malign behavior, and protects people of all nations that simply want to live free from Iranian predation.