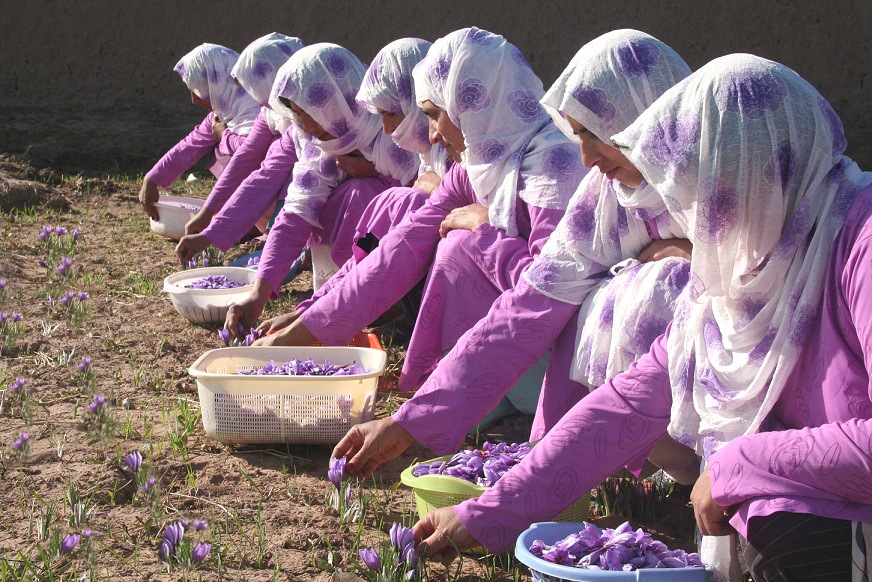 The Ghoryan Women’s Saffron Association is an organization born out of desperation. Bordering Iran in Afghanistan’s arid Herat province, Ghoryan is a place where fields yield little and men struggle to find work. Saffron — the world’s most expensive spice — has grown here for centuries, but Ghoryan’s saffron farmers, at least 700, have long been hostage to a vicious cycle of cash shortages during the planting season and depressed prices during the harvest.

The situation was even worse for Ghoryan’s female saffron growers, who traditionally received meager cash advances provided by traders in exchange for tending and harvesting small plots of land. For decades, women in Ghoryan had no other source of cash to contribute to the household over the long months from planting to harvest. This economic dynamic used to be immovable — but that was before Ghoryan’s female saffron growers decided to cut out the middleman, with a little help from the United States.

“With these Agricultural Development Fund loans, our association bypasses traditional saffron traders,” said Sima Ghoryani, founder of the Ghoryan Women’s Saffron Association. “We sell our own product to local and international markets.” Ghoryani, an avid businesswoman, brought together a group of female saffron growers; under her leadership the association is now selling saffron directly to wholesalers in Europe.

Afghanistan’s Agricultural Development Fund, a financial institution owned by the Afghan Government and supported by the U.S. Government and other donor agencies, started providing capital to Ghoryan’s female saffron growers in 2011. The first loan was $155,000. The money allowed the members of the association — initially 117 women — to purchase fertilizer and cover some of their living costs, while not taking cash advances from traders.

At the end of the harvest, the association dried the saffron, stored it, sought out bidders, sold the crop and paid back the loan.

Funding to female saffron growers in Ghoryan is continuing and the program, though modest in scale, has expanded dramatically. The 2014 loan to the Ghoryan Women’s Saffron Association was almost $300,000. Now, the association is one of several organizations channeling loans to more than 800 female agribusiness entrepreneurs. Local entrepreneurs in Herat province believe the effects of the U.S.-funded loans are sustaining businesses and making them more competitive.

“I am very happy we were able to obtain a loan from the fund,” said Mariam Jamee Ahmadi, president of the Herat Capable Women’s Association. “Formerly, we used to process our products without attention to standards. The loan and the advice of ADF [Agricultural Development Fund] technical advisers allowed us to improve the quality of our products, expand our business and hire more employees.” As an entrepreneur, Ahmadi buys products and sells them in the local market as she works with small agro-processing centers.

In Afghanistan, female access to financial services like bank accounts or loans is around 1 percent, and in the agricultural sector, until very recently, it was practically zero. To address this challenge, USAID used the Agricultural Development Fund to create ZAHRA. Derived from the name of Prophet Muhammad’s daughter, Saidatina Fatima Az Zahra Ra, ZAHRA offers a line of financial products designed exclusively for female Afghan farmers and small and medium enterprise (SME) agribusiness entrepreneurs. Cultural sensitivity was a key facet of the project’s design.

Many Afghan banks offer dubious financial products with questionable accordance to Islamic law. ZAHRA, in contrast, is 100 percent Sharia-compliant. Its operation is approved by the Agricultural Development Fund and its rules and regulations are vetted by the Fund’s Sharia Advisory Board.

Financial products provided by ZAHRA are interest-free and abide by financial principles outlined in Sharia law, incorporating culturally acceptable mechanisms (for example, parallel fees or service charges) so that the lender may obtain a profit from advancing cash, without violating the sharia ban on charging interest. ZAHRA arose from the Agricultural Development Fund’s commitment to ensure that rural women have access to credit.

Women borrowing money under the ZAHRA product line can have male relatives as guarantors, which, given local restrictions on female property ownership, makes loans easier to issue in the absence of female-owned collateral. Today, ZAHRA currently supports a wide portfolio of agribusinesses including annual and perennial horticulture, livestock husbandry and agro-processing.

Since its inception, the Agricultural Development Fund has kept a default rate below 5 percent, which is notable not only in the context of agricultural credit, but also considering the difficulties of enforcing contracts in Afghanistan. Even more significant, the default rate of loans to women has been zero.

So far, the fund has approved loans for eight women-owned organizations and commercial enterprises totaling $1.8 million, as well as smaller credits to more than 800 women throughout Afghanistan. Money managers said the assistance has had an unprecedented impact on the rural communities, promoting economic growth and prosperity by providing agricultural credit to rural men and women.

The first ZAHRA loan enabled the farmers and beekeepers of the Ghoryan Women’s Saffron Association to purchase the resources they needed to sell their goods at market prices. “By having access to credit, female farmers will no longer be the typical losers in the trade game,” said Ghoryani.