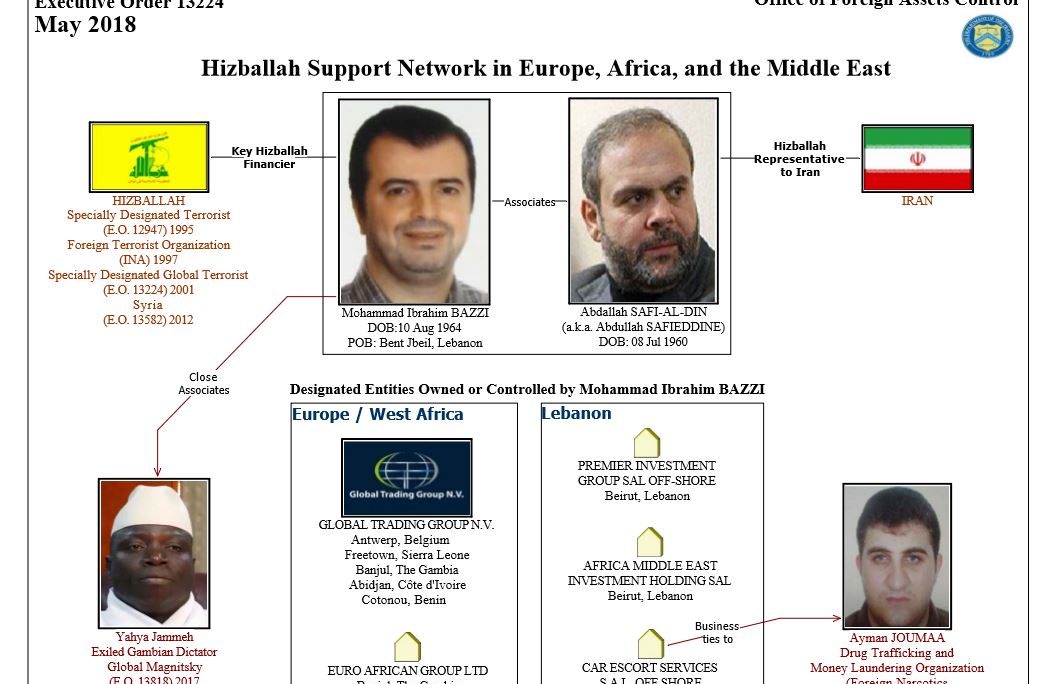 Washington – Today, the U.S. Department of the Treasury’s Office of Foreign Assets Control (OFAC) designated Hizballah financier Mohammad Ibrahim Bazzi and Hizballah’s representative to Iran Abdallah Safi-Al-Din as Specially Designated Global Terrorists (SDGTs) pursuant to Executive Order (E.O.) 13224, which targets terrorists and those providing support to terrorists or acts of terrorism.  Also designated today as SDGTs are five companies located in Europe, West Africa, and the Middle East for being owned or controlled by Mohammad Bazzi and another SDGT.  Specifically, OFAC designated Belgian energy services conglomerate, Global Trading Group NV; a Gambia-based petroleum and petroleum products company, Euro African Group LTD; and Lebanon-based Africa Middle East Investment Holding SAL, Premier Investment Group SAL Offshore; and Car Escort Services S.A.L. Off Shore (CES), an import/export  company based in Lebanon.  This is the third action in the past week in which OFAC has designated terrorists with a connection to the Central Bank of Iran.

“This action highlights the duplicity and disgraceful conduct of Hizballah and its Iranian backers.  Despite Nasrallah’s claims, Hizballah uses financiers like Bazzi who are tied to drug dealers, and who launder money to fund terrorism,” said Secretary of the Treasury Steven T. Mnuchin.  “The savage and depraved acts of one of Hizballah’s most prominent financiers cannot be tolerated.  This Administration will expose and disrupt Hizballah and Iranian terror networks at every turn, including those with ties to the Central Bank of Iran.”

As a result of today’s action, all property and interests in property of these persons that are in the United States or in the possession or control of U.S. persons must be blocked and reported to OFAC.  OFAC’s regulations generally prohibit all dealings by U.S. persons or within (or transiting) the United States that involve any property or interests in property of blocked or designated persons.

Today’s actions show the convergence of Iran’s support for terrorism with many facets of illicit criminal activity, including narcotics trafficking.  In addition to providing millions of dollars to Hizballah, Mohammad Bazzi is a close associate of Yahya Jammeh, the corrupt former leader of The Gambia who, in addition to ordering targeted assassinations, plundered The Gambia’s state coffers for his personal gain.  In addition, Bazzi has business ties to the Ayman Joumaa Drug Trafficking and Money Laundering Organization.  As Hizballah’s chief benefactor, Iran is complicit in the despicable behavior of Bazzi.  Specifically, Abdallah Safi-Al-Din, Hizballah’s representative to Iran and cousin of Hasan Nasrallah, Hizballah’s Secretary General, worked with Bazzi to reestablish a political relationship between The Gambia and Iran.  Moreover, Bazzi and Safi-Al-Din previously worked with the Central Bank of Iran, which OFAC recently identified as being complicit in facilitating the IRGC-QF’s access to hundreds of millions of dollars in U.S. currency, to expand banking access between Iran and Lebanon.

These designations by OFAC follow President Trump’s decision last week to cease U.S. participation in the Joint Comprehensive Plan of Action, and to begin reimposing U.S. nuclear-related sanctions on the Iranian regime.  They are in furtherance of the goal of addressing the totality of Iran’s malign activities and regionally destabilizing behavior, including that of Hizballah.  These designations complement the disruptive action Treasury took last week to shut down an extensive currency exchange network in Iran and the UAE that was transferring millions to Iran’s IRGC-QF.  This action is also in addition to two other actions taken this week targeting IRGC-QF and Hizballah financing, including an action against Iran’s Central Bank Governor and an action taken with Terrorist Financing Targeting Center partners designating Hizballah’s Shura Council and other leaders and financiers.  Today’s actions further restrict Hizballah’s access to the U.S. financial system and the Iranian regime’s network of regional proxy groups.

Mohammad Ibrahim Bazzi (Bazzi) was designated for assisting in, sponsoring, or providing financial, material, or technological support for, or financial or other services to or in support of, Hizballah.

Bazzi maintains ties to Hizballah financiers Adham Tabaja (Tabaja) and Ali Youssef Charara (Charara), whom OFAC designated as SDGTs for providing material support to Hizballah on June 10, 2015 and January 7, 2016, respectively.  Between 2009 and 2010, Abdallah Safi-Al-Din, also designated today, and Bazzi worked with the Central Bank of Iran to expand banking access between Iran and Lebanon.  Abdallah Safi-Al-Din was previously identified by Treasury’s Financial Crimes Enforcement Network (FinCEN) as being involved in Iranian officials’ access to former Lebanese Canadian Bank (LCB), which FinCEN identified on February 10, 2011 as a financial institution of primary money laundering concern under Section 311 of the USA PATRIOT Act for the bank’s role in facilitating the money laundering activities of an international narcotics trafficking and money laundering network.

In addition to providing millions of dollars to Hizballah, Mohammad Bazzi is a close associate of Yahya Jammeh who was identified on December 20, 2017, in the annex to E.O. 13818, which implemented the Global Magnitsky Human Rights Accountability Act.  Further, Bazzi has business ties to the Ayman Joumaa Drug Trafficking and Money Laundering Organization, which OFAC designated on January 26, 2011 pursuant to the Foreign Narcotics Kingpin Designation Act.  Bazzi also worked to provide funds to Tabaja, with whom he held a joint line of credit.

Abdallah Safi-Al-Din (Safi Al-Din) was designated for acting for or on behalf of Hizballah.  Safi Al-Din is Hizballah’s representative to Iran and acts as a conduit between Iran and Hizballah.  He has also has served as the interlocutor between Hizballah and Iran on financial issues.  As of 2011, Safi-Al-Din and Bazzi worked together to resolve a dispute between Iran and The Gambia and reestablish a political relationship between the two countries.  Safi-Al-Din is the cousin of Hizballah’s Secretary General Hasan Nasrallah (Nasrallah), whom OFAC designated pursuant to E.O. 13224 on May 16, 2018, E.O. 13582 on September 13, 2012, and also pursuant to E.O. 12947 on January 23, 1995.

Global Trading Group NV (GTG) was designated for being owned or controlled by Bazzi.  Bazzi is one of the founders and a Managing Director of GTG, a global energy products and services company headquartered in Antwerp, Belgium that also has locations in Sierra Leone, The Gambia, Ivory Coast, and Benin.  As of 2015, Bazzi, as an owner of GTG, had drafted two securities totaling approximately $1 million to operate and maintain two power plants in Lebanon.

Euro African Group LTD (EAGL) was designated for being owned or controlled by Bazzi.  Bazzi is the Chief Executive Officer and Managing Director and majority shareholder of EAGL, a petroleum and petroleum products company located in Banjul, The Gambia.  GTG, in collaboration with EAGL, claims to have been the exclusive importer of all fuel products into The Gambia since 2003.

Africa Middle East Investment Holding SAL (AME Investment) was designated for being owned or controlled by Bazzi.  Bazzi is the Chairman, Managing Director, and majority shareholder of AME Investment, a holding company located in Beirut, Lebanon.

Premier Investment Group SAL Offshore (PIG Offshore) was designated for being owned or controlled by Bazzi.  Bazzi is the founder, Chairman, Managing Director, and majority shareholder of PIG Offshore, a financial services company in Beirut, Lebanon.

Car Escort Services S.A.L. Off Shore (CES), an import/export company based in Lebanon, was designated for being owned or controlled by Bazzi and Charara, who collectively own two-thirds of the company.

These five companies should not be viewed as an exhaustive list of companies owned or controlled by Bazzi, and the regulated community remains responsible for conducting necessary due diligence and maintaining compliance with OFAC’s 50 percent rule.

Each of the two individuals and five entities designated today are subject to secondary sanctions pursuant to the Hizballah Financial Sanctions Regulations, which implements the Hizballah International Financing Prevention Act of 2015.  Pursuant to this authority, OFAC can prohibit or impose strict conditions on the opening or maintaining in the United States of a correspondent account or a payable-through account by a foreign financial institution that knowingly facilitates a significant transaction for Hizballah, or a person acting on behalf of or at the direction of, or owned or controlled by, Hizballah.

Hizballah was designated by the Department of State as a Foreign Terrorist Organization in October 1997 and as an SDGT pursuant to E.O. 13224 in October 2001.  It was listed in January 1995 in the Annex to E.O. 12947, which targets terrorists who threaten to disrupt the Middle East peace process, and also designated in August 2012 pursuant to E.O. 13582, which targets the Government of Syria and its supporters.

A network chart on the individuals and entities designated today.

Identifying information on the individuals and entities designated today.