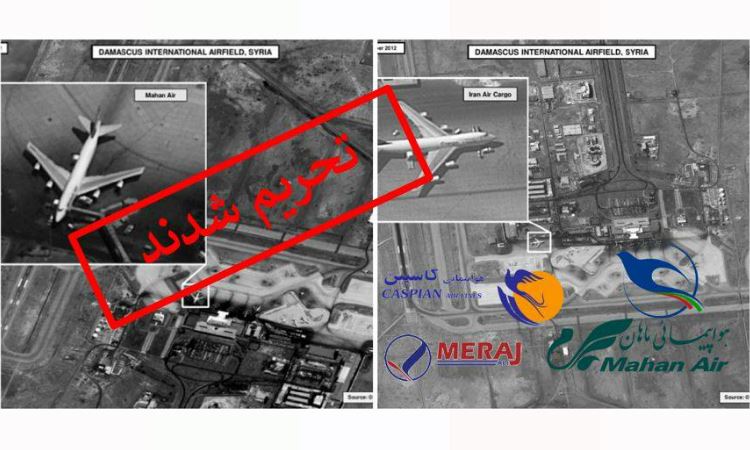 Washington – Today, the U.S. Department of the Treasury’s Office of Foreign Assets Control (OFAC) designated nine individuals and entities procuring export-controlled, U.S.-origin goods for sanctioned Iranian airlines. They were designated as Specially Designated Global Terrorists (SDGTs) pursuant to Executive Order (E.O.) 13224, which targets terrorists and those providing support to terrorists or acts of terrorism. OFAC also identified 31 aircraft in which entities previously designated under E.O. 13224 have an interest.

“The facilitators designated by the Treasury today have been procuring parts and providing services for the fleets of sanctioned Iranian airlines, including Mahan Air, Caspian Air, Meraj Air, and Pouya Air.  In so doing, they extend a lifeline to the IRGC-QF and enable the Iranian regime to transport weapons, fighters, and money to its proxies, including Hizballah, and to prop up the brutal Assad regime,” said Treasury Secretary Steven T. Mnuchin. “Countries and companies around the world should take note of the risks associated with granting landing rights and providing aviation services to the airlines used by Iran to export terrorism throughout the region.  The deceptive practices these airlines employ to illegally obtain services and U.S. goods is yet another example of the duplicitous ways in which the Iranian regime has operated.”

Designated Iranian commercial airlines in general, and Mahan Air in particular, have played a critical role in exporting the Iranian regime’s malign influence.  Mahan Air was designated in 2011 under Executive Order 13224 for support to the Islamic Revolutionary Guard Corps-Qods Force (IRGC-QF).  Mahan Air has ferried IRGC-QF operatives, weapons, equipment, and funds to international locations in furtherance of Iranian state-sponsored terror operations.  Mahan Air has provided travel services to IRGC-QF personnel flown to and from Iran and Syria for military training and has facilitated the covert travel of IRGC-QF members by bypassing normal security procedures and flight manifests.  Mahan Air has also transported weapons and personnel for Hizballah and regional armed groups promoting conflict and regional instability.  Since the onset of the Syrian civil war, Mahan Air and designated Iranian commercial airlines have routinely flown fighters and materiel to Syria to prop up the Assad regime.  Iran’s military support for Assad has contributed to mass atrocities in the country and the displacement of millions across the region.

Designated Iranian airlines rely heavily on front companies across the world who illicitly procure the parts and services required to sustain their fleets.  Front companies like those being designated today employ deceptive measures to illegally obtain controlled U.S. parts from suppliers.  Additionally, we are identifying a number of aircraft associated with designated Iranian airlines Mahan Air, Caspian Air, Meraj Air, and Pouya Air, giving notice to those who grant landing rights and provide general services to these aircraft that they could be exposed to U.S. sanctions.

Today’s actions are the result of a U.S. Government-wide effort to prevent the procurement of U.S.-export controlled goods by designated Iranian airlines through individuals and entities in third countries, demonstrating the United States’ commitment to enforcing existing sanctions and to targeting those that support terrorism. These actions build upon President Trump’s decision to cease the United States’ participation in the Joint Comprehensive Plan of Action (JCPOA) and begin re-imposing U.S. sanctions that had been lifted under the JCPOA.

Nine aircraft in which Caspian Air

Five aircraft in which Meraj Air

Five aircraft in which Pouya Air

Twelve aircraft in which Mahan Air