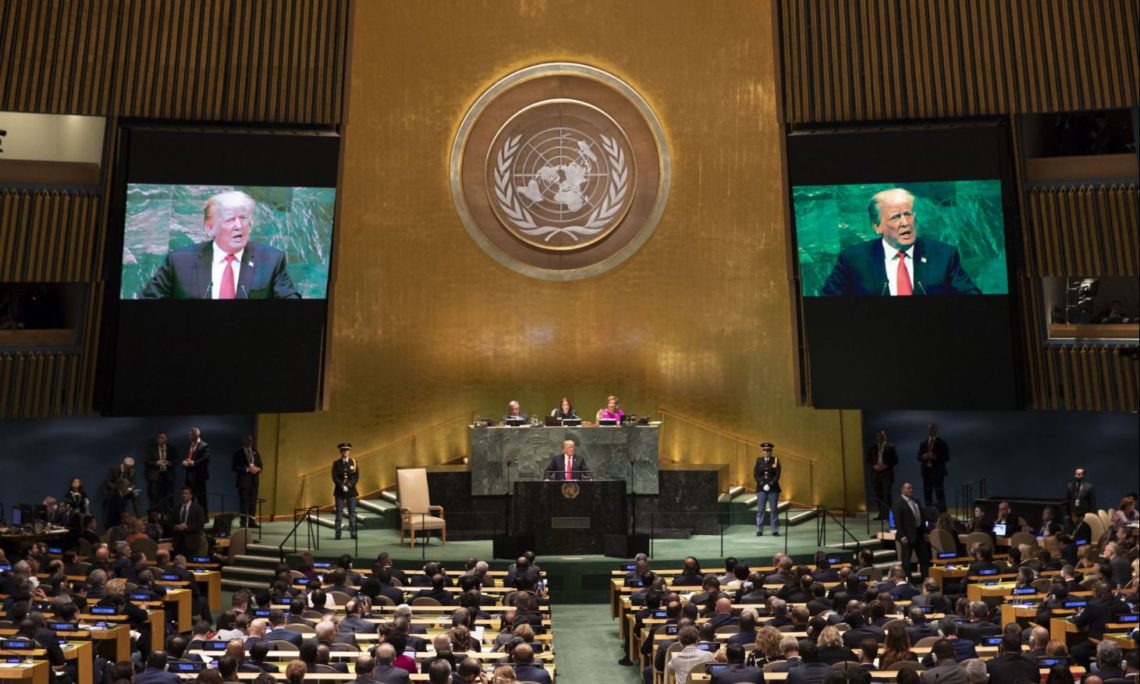 President Trump urged world leaders to stand with the United States in seeking to block the Iranian regime from spreading “mayhem across the Middle East.” He also asked other nations to honor the United States’ sovereignty while defending their own.

Addressing the U.N. General Assembly for the second time in his presidency, he expressed optimism that engagement with North Korea will remove the specter of a nuclear conflict. “The missiles and rockets are no longer flying in every direction. Nuclear testing has stopped,” he said, but “much work remains to be done” before sanctions are removed.

He emphasized the U.S. commitment “to a future of peace and stability” in the Middle East, including peace between Israelis and Palestinians. Trump said his approach to seeking peace in the Middle East is “yielding great strides,” including driving “the bloodthirsty killers known as ISIS” out of Syria and Iraq.

But he called the ongoing civil war and humanitarian crisis in Syria “heartbreaking” and blamed Iran for fueling and financing the conflict.

“Iran’s leaders sow chaos, death and destruction. They do not respect their neighbors or borders or the sovereign rights of nations,” said the president. He accused them of plundering their nation’s resources to line their own pockets.

He said the United States, which pulled out of the Iran nuclear deal in May, will add more economic sanctions against Iran, and he urged “all nations to isolate Iran’s regime as long as its aggression continues.”

Trump said he honors the right of every nation “to pursue its own customs, beliefs, and traditions. The United States will not tell you how to live or work or worship. We only ask that you honor our sovereignty in return.”

Trump had praise for the work of the United Nations, saying, “The whole world is richer, humanity is better, because of this beautiful constellation of nations.” But he said, “Only when each of us does our part and contributes our share can we realize the U.N.’s highest aspirations.”

The president addressed other major issues:

He closed the address talking about the future and how to “make our nations greater, our regions safer, and the world better.”

“Sovereign and independent nations are the only vehicle where freedom has ever survived, democracy has ever endured, where peace has ever prospered,” the president said. “And so we must protect our sovereignty and our cherished independence above all.”