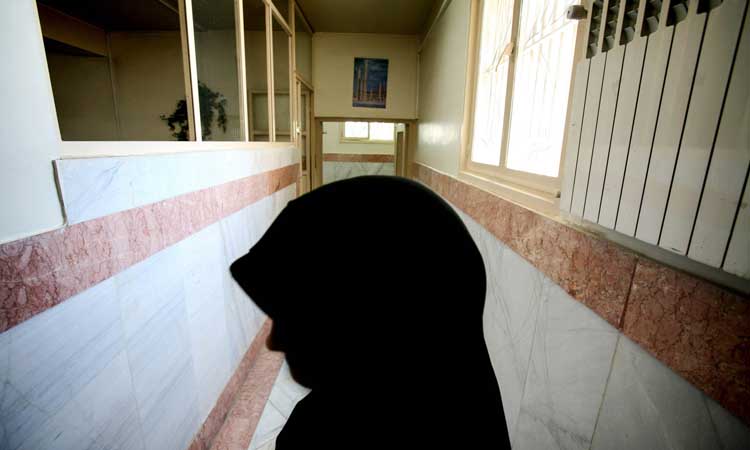 A female prison guard stands along a corridor in Tehran's Evin prison June 13, 2006. Iranian police detained 70 people at a demonstration in favour of women's rights, the judiciary said on Tuesday, adding it was ready to review reports that the police had beaten some demonstrators. (© Morteza Nikoub

Esmail Bakhshi remains in jail today for speaking up about torture in Iranian prisons.

Iranian forces arrested and savagely beat Bakhshi for taking part in a November 2018 labor protest in the city of Ahwaz in southern Iran. For three days, he couldn’t move in his solitary-confinement cell.

“The pain was so unbearable that it made sleeping impossible,” he posted on social media in January, recounting his 25 days in jail. “Weeks after my release, I still feel intolerable pain in my broken ribs, left ear, and testicles.”

Shortly after he made that post, security forces re-arrested Bakhshi, the Center for Human Rights in Iran reported. “Instead of punishing those who commit torture, the Iranian authorities punish the victims of torture,” said Hadi Ghaemi, the group’s executive director.

Workers' rights activist Esmail Bakhshi has been detained in #Iran since January 2019. He was imprisoned for peacefully advocating labor rights and publicly stating that he was tortured in the custody of the Intelligence Ministry–where he remains to this day. #FreeEsmailBakhshi pic.twitter.com/4sYouniFVd


Bakhshi is among more than 800 political prisoners and prisoners of conscience who are routinely tortured in jail. The U.S. Department of State’s 2018 Report on Human Rights, supported with evidence from numerous international human rights organizations, reveals widespread torture, rape and other inhumane conditions inside Iran’s prisons.

The State Department’s 2018 Human Rights Report names Wards 209 and 2 of Evin Prison as the place where witnesses say the Islamic Revolutionary Guard Corps (IRGC) uses cruel and prolonged torture of political opponents of the Iranian regime, such as:

Another IRGC technique is called the “miracle bed,” which includes tying detainees to a bed frame and repeatedly flogging and electrocuting them until they “confess,” according to the report.

Where does this ‘bestial behavior’ come from?

Iranian prison guards in February beat 20 female inmates in Gharchak Prison and locked them in solitary confinement without food, heat or medical attention for staging a small protest concerning their release date, according to the Center for Human Rights in Iran.

One of them, Elham Ahmadi, received an additional 148 lashes for speaking out about the poor living conditions at the prison. She is among 208 members of the Sufi Gonabadi order sentenced to prison for attending a 2018 protest.

In Iran, this is what happens when one talks about terrible prison conditions. #ElhamAhmadi, an imprisoned dervish at the notorious Gharchak prison, reported on prison conditions, for which she's been sentenced to 148 lashes. Meanwhile, authorities deny the existence of torture pic.twitter.com/Cuyt4tHhkc


“Do you have to unleash the guards and use tear gas in a closed space and endanger the prisoners’ lives over a little protest in Gharchak Prison?” asked the Iranian journalist Mahtab Gholizadeh on Twitter. “Where does this merciless bestial behavior come from?”