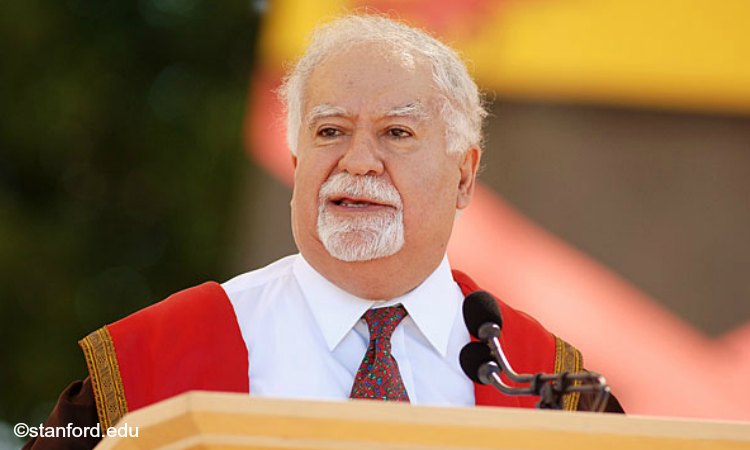 Vartan Gregorian was born on April 8, 1934 in Tabriz, Iran to a Christian Armenian family and is an Iranian-Armenian academic, currently serving as the president of Carnegie Corporation of New York.

Gregorian was six years old when his mother, then twenty-six, died of pneumonia. His father, who worked for the Anglo-Iranian Oil Company in Abadan, was away from home much of the time, and hence Gregorian and his younger sister were raised by his maternal grandmother.

Gregorian came to the United States in 1956 as a freshman, attending Stanford University, where he completed his B.A., with honors, in two years. After receiving his dual PhD in history and humanities from Stanford in 1964, Gregorian served on the faculties at several American universities before joining the faculty of the University of Pennsylvania in 1972 as Tarzian Professor of Armenian and Caucasian History and Professor of South Asian history. In 1974, he was appointed founding dean of U. of Pennsylvania’s Faculty of Arts and Sciences and became Provost in 1978. From 1981 to 1989, Gregorian served as president of the New York Public Library, an eight-year tenure which would prove one of his most lasting legacies.

In 1988, he was chosen to become president of Brown University, where he served for the next nine years. In 1997, he was selected as president of philanthropic Carnegie Corporation of New York. He is also a trustee of the Museum of Modern Art, the American Academy in Berlin, the Institute for Advanced Study, and Brandeis University, among other institutions.

He has received the National Humanities Medal. In 2004, he received the Presidential Medal of Freedom, the highest civilian award in the United States. Gregorian is on the advisory board of the USC Center on Public Diplomacy, the Brookings and is a member of the editorial board of the Encyclopedia Britannica.

He has also received honorary degrees from nearly seventy institutions, such as the American University of Beirut, Brown University (USA), University of St. Andrews (UK), Tufts University, Jewish Theological Seminary of America and a lot more.  He documented much of his private life in his 2003 autobiography The Road to Home: My Life and Times.
President George H.W. Bush appointed Vartan Gregorian to the Fulbright Commission. President Bill Clinton awarded Dr. Gregorian the National Humanities Medal. President George W. Bush later awarded Dr. Gregorian the Presidential Medal of Freedom. On June 17, 2009, The White House announced that President Barack Obama had appointed Gregorian to the President’s Commission on White House Fellowships. Gregorian has also been decorated by the French, Italian, Austrian and Portuguese governments. Gregorian is also the recipient of the Ellis Island Medal of Honor and the American Academy and the Institute of Arts and Letters’ Gold Medal for Service to the Arts.