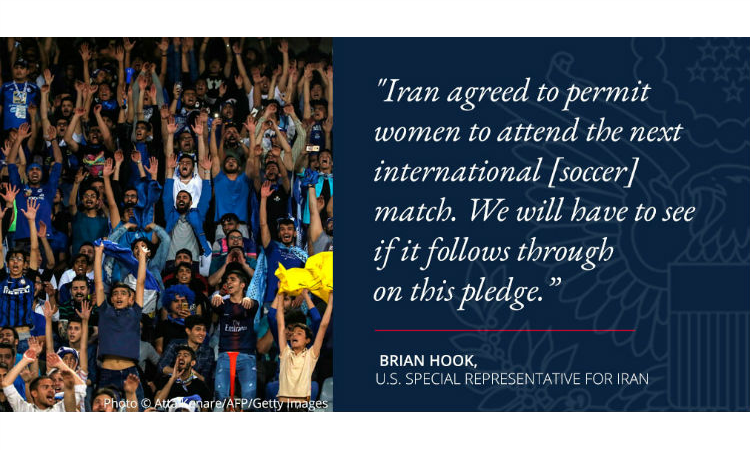 Soccer fans around the world are watching to see if the Iranian regime will allow women to attend a World Cup 2022 qualification game to be held in Tehran’s Azadi Stadium on October 10.

Iran is the only country that bans women from watching men’s sporting events in public stadiums, one of many rights for women that the 1979 Iranian Islamic Revolution wiped out.

FIFA, the international soccer/football organization, has said: “FIFA’s position is firm and clear: Women have to be allowed into football stadiums in Iran. For all football matches.”

FIFA has stressed to Iranian authorities that women who line up to buy tickets for the match must be permitted to buy them and attend the game. This is to prevent the regime from attempting to deceive the international community — again.

Last November in Tehran, at a match where FIFA officials were present, regime officials permitted only a select group of women to attend a portion of the Asian Champions League final. Immediately following the match, as widely reported, Iranian security forces reverted to denying women entry into football stadiums.

The World Cup qualifier in Azadi Stadium follows the September death of a 29-year-old Iranian woman who died after trying to enter that stadium. Sahar Khodayari set herself on fire in front of a Tehran courthouse after learning she might have to spend six months in jail for trying to watch a game.

Khodayari was more commonly known as “Blue Girl” after the color of her favorite team, Esteghlal. Her death sparked an international outcry against the Iranian regime’s repressive practices against women.

At a recent speech in New York, U.S. Special Representative for Iran Brian Hook asked, “What would it look like to challenge Iran’s record on human rights?”

Hook said that after FIFA condemned Iran on its policy that prevents women from attending soccer matches, “the world joined” in its denouncement.

“Amidst mounting pressure, Iran agreed to permit women to attend the next international match. We will have to see if it follows through on this pledge,” Hook said.